Days of Our Lives Spoilers: Who Gets Killed In DOOL Murder Mystery – See The Likely Candidates 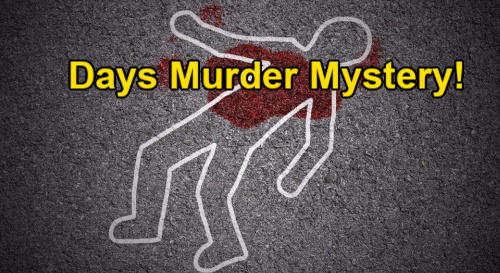 Days of Our Lives (DOOL) spoilers tease that there’s a big whodunnit murder mystery coming up on the NBC soap. There are several storylines that could feasibly result in a death at this point, and right now it’s up in the air as to which character is going to get killed and kick off the big mystery of who did the killing.

Of course, one glaringly obvious candidate to be murdered is Charlie Dale (Mike C, Manning). Ever since it was revealed that Charlie raped Allie Horton (Lindsay Arnold), there has been no shortage of people out to get Charlie.

Certainly, a lot of people are angry with Charlie over the assault and would like to see him gone permanently.

That list of characters would include Charlie’s own mom, Ava Vitali (Tamara Braun). Ava is bitterly disappointed in Charlie over the assault, and she’s also scared of him since he hit her over the head and kidnapped her.

Days of Our Lives spoilers say that Charlie will once again threaten Ava, so Ava might feel even more backed into a corner in the coming days.

Of course, any number of people in Allie’s family – including Allie herself – could be on the suspect list if Charlie gets murdered. There would also be Tripp Dalton (Lucas Adams) who would be close to the top of the suspect list as well, and Claire Brady (Isabel Durant) could even be suspected of the crime.

But Charlie isn’t the only possible candidate to be murdered in Salem. What about Gwen Rizczech (Emily O’Brien), who has recently ruffled the feathers of the Deveraux and DiMera clans?

Gwen has a lot of people upset with her right now, including Chad DiMera (Billy Flynn), who recently threatened her and told her to stay away from Abigail DiMera (Marci Miller).

And then there’s Abigail herself – we can’t forget that Abigail has killed before in self-defense, and she could always strike again. In fact, we wouldn’t put it past Gwen to start some sort of altercation with Abigail that could result in Abigail accidentally killing Gwen.

Even someone like Laura Horton (Jaime Lyn Bauer) could have a moment and lash out at Gwen with disastrous consequences. And speaking of Laura, she could actually be another candidate to be murdered.

After all, Gwen is probably going to be screaming mad when she finds out that Laura paid off her mother all those years.

Something tells us that Gwen won’t stop until she discovers who was behind her not getting to know her father as a young girl, and that’s eventually going to lead her straight to Laura.

In fact, Days of Our Lives spoilers hint at some sort of altercation between Laura and Gwen in the coming days that will certainly lead to Gwen taking out her anger on the person she feels ruined her life.

Days buzz also makes it clear that Laura meets a tragic end as a consequence of this altercation but it’s accidental. So technically this would not be a murder mystery since fans would know who is responsible for Laura’s death and also an accident isn’t a murder.

We’ll see what happens here, but there’s definitely more than one contender as to who’s going to be murdered in Salem soon. Who do you think it will be? Stay tuned to the NBC soap and don’t forget to check back with us here at CDL for the latest Days of Our Lives spoilers, daily episode recaps, and news.