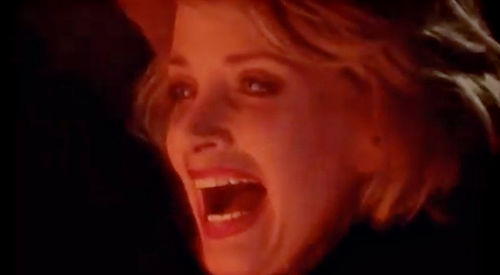 Days of Our Lives spoilers reveal that a new teaser features an evil laugh that long-time fans know well. The only visual that is shown is Salem in the darkness. There are a few lanterns that emit an eerie glow and the camera zooms in on Brady’s Pub. The only sound is the evil laugh, which fans have not heard since Marlena Evans (Deidre Hall) was possessed by the devil.

Something Wicked Is Coming to Salem

DOOL spoilers reveal that the teaser was posted to Instagram with only the caption, “Something wicked is coming to Salem.” Fans have seen Salem at night before, but there is something that seems so ominous about this preview.

The way the darkness is falling on the street as the leaves rustle in the breeze. The eerie way the lanterns are glowing and the slow, methodical manner in which the camera rises up, then to the left to focus on Brady’s pub.

Finally, the answer is clear when echoes of Marlena’s possessed and maniacal laugh can be heard toward the end of the clip.

“There’s a huge story coming up for them and I am very excited about it. John and Marlena will face a huge threat to their relationship and the audience will want to tune in.”

Days of Our Lives spoilers reveal that on September 5, Hall interviewed with BriefTake. Toward the end of that interview, the actress seemed to confirm Marlena’s second possession storyline.

What she said was that for the first time ever, Marlena is invited to celebrate the Horton Christmas event. As fans know, that is a big deal and is the focus every year around the holidays.

However, Hall indicated that things don’t go according to plan because something terrible happens.

Days of Our Lives Spoilers: Marlena Evans Gets Crueler

Hall continued that with the possession storyline, Marlena gets to be “quite mean and cruel this time.” That is when fans know that Marlena indeed gets possessed for the second time. Will John save her once again or will someone else step in to save the day?