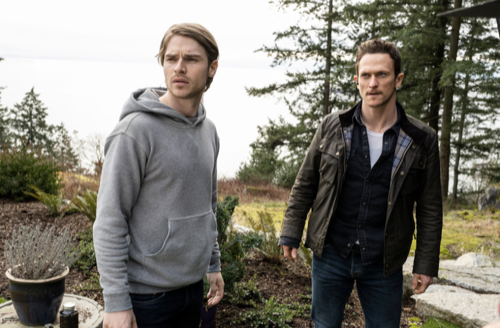 Tonight on NBC their new Sci-Fi drama Debris airs with an all-new Monday, May 3, 2021, episode and we have your Debris recap below. On tonight’s Debris Season 1, episode 10 called, “I Am Icarus”,  as per the NBC synopsis, “The mystery deepens as Bryan and Finola attempt to right what has gone wrong and prevent the fabric of reality from unwinding.”

In tonight’s Debris episode, the episode begins with Bryan untying Shelby and he says George told him that he was a pilot and he realizes, he is a pilot too. A helicopter is approaching, Bryan says they need to go. The two start running down a hill and jump off a cliff. Grace is there and tells Bryan not to do it, she fires but he already jumps. Underwater, Bryan follows Shelby to a tunnel, when Bryan can no longer breathe Shelby pushes him into a corner of the tunnel.

We then see Bryan and Grace in an SUV, she is driving and they stop somewhere where she is picking up on something. Bryan goes to knock on the door of the house, Kathleen answers and he says she is back. He says he knows Shelby, he knows what she found in the sea,. She tells him that she made Shelby disappear a few days ago, they went out to it and when she came back he was gone like he was erased and never born.

He says he is Bryan, he works for the government and came out to investigate what she found. He can’t find his partner either and wants to help her get back like Shelby, he was just with him and he wants to get back. Bryan goes into her living room, there are other people, but they are in a fog, it is like you can see other realities but they are not there. Bryan says the people they are seeing are in another reality bleeding through and thinks they made have caused. Bryan tells her that they need to find George, his partner’s father.

Grace walks in and Kathleen gets nervous, Bryan tells them they need to find George. Grace reminds him that he killed George two days at the influx compound. Then they see Kathleen, she is running away. Bryan and Grace run after her. Too late, Kathleen jumps into the water. Bryan jumps in as well. They both head through the tunnel, Kathleen holds her hands on her chest and puts herself to the inside of the tunnel.

Finola is with Gibson, they are driving in an SUV when they pull over. He tells her that there is definitely something out there. Next, they head to Kathleen’s house, they ask if her parents are home and she says no they are traveling. Kathleen asks Finola if she can reach her father, George is the only one who can save the world. Finola and Gibson head inside, they see the people in trapped in a different reality, she says they have been there since her brother disappeared, she also mentions agent Bryan that was there, he was looking for George. Kathleen tells her that she has to find her father, he is the only one that can fic this.

Finola calls George, she tells him what Kathleen said. Finola asks him if there is any truth to what Kathleen says. George says she must accept that her brother is gone, any more jumps can cause a lot of damage. Kathleen is in the kitchen, she can see her brother and Bryan in another reality, they can see them too.

Finola is looking at Bryan, he writes a note, but when he turns it around, they vanish. Kathleen says the other people can’t see them but they can, that must mean something. Finola says she can’t deny what she just witnessed but her father thinks the universe is in a state where it can’t take her visiting the debris again. Kathleen says it is her fault, she insisted her brother do the jumps in the first place and needs to fix this. Kathleen runs out of the house and down the hill, and again, she jumps.

Kathleen is back in the kitchen, she looks for something to write on, sits on the floor, and starts writing a message to her brother who she can see again. She says I love you. Bryan is still with him, Kathleen says she is sorry. They try to touch each other.

Finola is with Grace in the SUV, they are at the location where Kathleen jumped. Then, the two head to the house again, outside there is a reality cloud, on the upper level of the house. Finola says she will have to clear the house, Kathleen says she knows, this is not the first time she has been here. Kathleen tells her about her brother and Bryan, she spoke to them and they want to speak to Finola.

They head in the kitchen, Bryan turns around his note pad and it says another version of you was on the verge of the answer, something about a bilateral deviation and he has no clue what that means. Bryan tells her no more time. Bryan is gone. Kathleen and Finola head outside, Grace is there and they see a helicopter coming, Finola tells them they have no more time. Kathleen urges her to jump with her, they can take the information and start over again with the knowledge they have now.

Finola is back, she calls her father and tells him that he is going to have to get them to stand down, she needs more time. Finola is back in the house with Kathleen, she tells her that they all need to jump together, to put things back to where they began. They synchronize their watches, they all head outside and run. Finola asks Kathleen if they will remember everything once they are back in their realities, Kathleen doesn’t know.

They all jump and are inside the tunnel. Then we see Bryan and Finola together, they stop by the ocean, then back to the house. Shelby and Kathleen say hi, Shelby tells Bryan to come in, he will tell him what he knows. Meanwhile, Craig is in his office, he gets a message about a lunch appointment missed, but he didn’t have one. He then calls Julia, gets the answering machine, and hands them up. Craig arrives home and finds an envelope on the kitchen table. He sits down and opens it up, it is divorce papers.

Anson is giving back his dinner tray and grabs the guard’s hand who tells him that he is writing him up on a report for that. The guard then enters the code to the security gate and Anson can read it in his mind, he smiles.