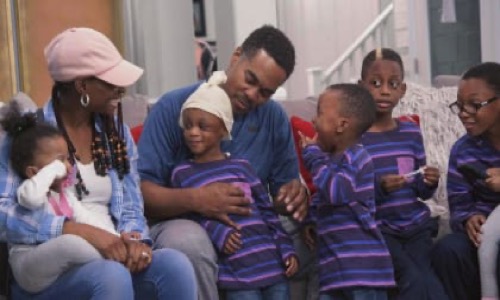 In tonight’s DDWTD episode, it’s not easy being a parent. Deon and Karen knew that it is better than most because they were parents to fourteen children and unfortunately one of those children needed surgery. Their son Diez had an abnormally shaped head. The doctor needed to cut into his skull and restructure it. But as the whole world was dealing with coronavirus, the hospital only allowed one parent into the hospital.

Karen went with Diez to the hospital and sadly she wasn’t allowed to watch the surgery or sit in. She was stuck in the waiting room. She got to thinking and she imagined the worst possible scenarios out there. It had depressed her so much that one of Diez’s doctors suggested she go home to be with her family.

Karen’s kids were a delight. They got a singing teddy bear and they were all going to record a message on it for their brother Diez. Diez’s surgery was supposed to late anywhere between four to six hours. Karen received an hour every two hours to update her about Diez’s condition. Only the doctors called after seven hours to say that it might be seven more hours.

Diez’s parents didn’t know whether or not to be alarmed. They weren’t told why the surgery was taking so long and so the waiting and not having any sort of answers had the parents breaking down. Deon broke down in tears after he had been told one more time that the surgeons needed more time. Deon had been scared as in truly scared and nothing was ever going to shake that fear.

At least not until he saw his son alive and whole. The family stayed up late into the night to find out when the surgery ended and then and only then did they start to relax. Their next concern was brain activity. Deon and Karen won’t know Diez’s brain activity until he’s fully up and doctors could see how he reacts to the world around him. Karen visited Diez’s first.

She saw him at the hospital and she live-streamed seeing him so that the rest of the family could see him. Deon also got to speak with the doctor. The doctor said the brain activity they see is perfectly normal. The doctor also said that they have to proceed with caution for Diez. Diez needs rest and relaxation. He later woke up and he couldn’t see.

Diez was suffered from severe swelling. His eyes were swollen shut and so he couldn’t see and so now he doesn’t want his mother to leave him for even a second. She tried to step out of the room once. Diez cried and cried until she came back. So, she stayed. She and Diez shared his hospital bed because he wanted to sleep cuddled up to his mother.

Karen was also updating Deon with Diez’s condition and Deon meanwhile was hiding a surprise from the family. Not Karen. Karen is in the know. She knows Deon wanted to create a new boys’ room. He wanted it to be a treat for Diez for when he comes back home and he finds his bedroom is suddenly bigger. It also wouldn’t be as packed with junk as the last one. Deon has one of his best friends overviewing it and he asked his friend to deliver on a boy’s dream.

There was some good news. Diez was doing so well that the hospital was releasing him a day early and so his family ran about getting everything ready. They sang their song to the bear. It was their song because the twins wrote it and then everyone started chipping in with their voices. GG didn’t sing, though. GG wasn’t a great singer. Just ask her grandchildren and they’ll all tell you that GG couldn’t sing.

It was therefore great when her part in the family singing was to just make sure the bear was picking up the recording. The family really wanted Diez’s return to be special. Diez’s swelling was still pretty bad. He couldn’t see or feed himself and so his parents had to feed him while the swelling was so bad.

Diez’s swelling also meant he couldn’t hang out with his twin like he normally would have. Diez had to feel the face of whoever was speaking to him to get an idea of what they looked like at the moment, but the family turned into a very light-hearted moment and so Diez got to laugh. He laughed a lot. Diez’s swelling eventually went away.

Just not before he and his family were told they couldn’t roughhouse with him and that he couldn’t bang his head. For the next few weeks, Diez had to take special consideration of his skull. He couldn’t undo the doctor’s work by getting involved in a pile on with his brothers. The doctors wanted him to take things and easy. They failed to take into account that Diez is just a baby.

Diez wasn’t going to speak up about something bothering him. His response to anything was to hold onto his security blanket and so he wasn’t going to complain about main or spasms. Also, with Diez back in their care, the family decided it was time to go home.

The kids walked in and they were amazed by all the changes. They love the dance floor, they loved the long chair that could fit them all, and they loved their rooms. The bunk beds were all the kids ever wanted and so they went nuts once they saw it all.