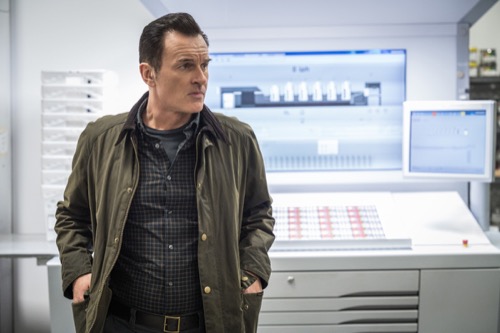 Tonight on CBS FBI Most Wanted airs with an all-new Tuesday, March 02, 2021, season 2 episode 7, “Winner,” and we have your FBI Most Wanted recap below. In tonight’s FBI season 2 episode 7 as per the CBS synopsis, “After a suspect escapes trial and goes on a murder spree, the team partners with his bail bondsperson in order to track him down; Jess continues to struggle with moving forward in his love life.”

In tonight’s FBI Most Wanted episode, a man due in court escaped custody after shooting two innocent people and stealing their car. Meanwhile, Jess heads to see his daughter Tali at riding lessons. Her teacher is very impressed by her. While he talks with her teacher, he gets a call.

Jess and the team arrive to get the rundown on a fugitive by the name of Travis who skipped town. The bounty hunter wants in on the investigation. Sheryll tells her to step back. She reminds them all about the past cases she helped on. They let her on the case. Travis’ lawyer tells them he had no priors. They head to his room to look around. Meanwhile, Travis is angry, yelling at a man. He wants to know where someone is.

Sheryll visits Travis’ ex-wife. She tells Sheryll that Travis doesn’t aspire and follows the rules. Sheryll gets a call. The team heads to a local home. They find a dead man with witnesses saying they saw Travis at the location. They learn he stole the man’s car. They look for a connection. They think Travis is going after lottery winners as they learn the victim just won $50k.

While the team works, the bounty hunter talks to a woman Travis was in a relationship with. The team gets a heads up Travis has some belongings nearby. They find a bunch of scratch tickets and other items, realizing Travis is rigging lotto tickets somehow.

Jess and the bounty hunter pay a visit to a local convenient store. The clerk tells them all about their latest lotto winners. Ken and Jess then head to the lotto headquarters. They talk to a manager. They think Travis is working with someone on the inside. Ken gets a call Travis has been spotted. Sheryll just misses Travis.

Sheryll, Ken, and Travis do some digging and realize Travis has a partner by the name of Addison. They learn Addison has changed their partnership rules. Now Travis is mad and looking for her. Meanwhile, Addison is hiding out in a hotel. She has a psychic friend bring her food. Later, Travis attacks her in her room. The team arrives as she is being brought out on a gurney.

The team listens to the caller who gave a tip of Travis’ whereabouts. Meanwhile, Travis tracks down Addison’s psychic friend who brought her food. It seems they paired up behind Addison’s back. A short time later, the team finds the location of Travis and the psychics hang out, just missing them.

Sheryll and Jess take off to find Travis when the bounty hunter calls them. She knows where Travis might be. She paid a friend of his for information. They pull a BMW over on the side of the road. It’s the psychic friend. She goes to pull a gun but they get her. They haul her into their vehicle. She yells at Jess the whole time that he has given up on life. He needs to let the light in. In his care, he finally takes his wedding ring off.

Jess heads to see Tali at horseback riding lessons. He has been interested in her teacher. He gets up the courage to ask her to dinner. She tells him she can’t. He tells her no problem and then waits in the car for Tali.