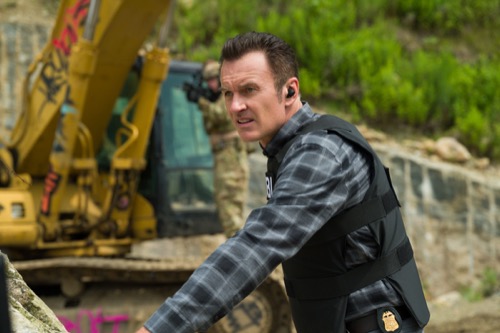 There was a mass shooting at a popular hotel in Washington DC. The manhunt for the shooter was given to LaCoix’s team because one of the victims was a federal officer and so the team traveled to the capital to investigate. They were down two people what with Crosby recovering from his injuries. Hana also was taking care of her mother and it will still be a while before she comes back. In the absence of two of his agents, LaCroix reassigned Special Agent Kristin Gaines to his team. She was a trained officer that the team has worked with in the past and she worked out of the Miami office. She’s worked with the team before but that had been when they were running point on the case and so it was different when she got a say.

Gaines immediately demanded a chance to lead. LaCroix’s surprisingly let her and that wouldn’t have happened if his mind had been in the game. He hasn’t really been the same since the shooting at his house. His family hasn’t been the same. His daughter and girlfriend both almost died. They’ve withdrawn since the incident and LaCroix doesn’t know what to do. But he didn’t allow his own concerns to let him forget the bigger picture. The mass shooting was the issue at hand. The intended victim seems to be Callie Martin and she was a concierge at the hotel. She was also living with her father since he got injured in the attack on the capital. He was a police officer and the injuries he sustained force him to take medical leave.

It seems his daughter has been trying to get him justice. Callie started researching the FBI’s Most Wanted page and she ran images against the photo IDs that her hotel collects on all their clients. She accessed that information without her bosses knowing. She also turned in a few. She turned in Milton Krabbe and he was absolutely insane. He believed that the current government was illegitimate because the guy he voted for didn’t win. Krabbe tried to overturn the government on January the 6th and he was part of a movement that saw several dead because of it. Krabbe was a former military. He was part of a militia group and they were a bunch of former servicemen fighting against the government.

They didn’t believe the current government held jurisdiction over them. Krabbe’s lawyer was Jeff Ferguson and he was a part of the group. He wasn’t even a defense attorney. He didn’t usually see inside of courtrooms and yet he was representing two men accused of rioting during the violence in the capital. The other man was named Travis Baker. He matched the description of the shooter in Callie’s murder and his sister-in-law rented rooms during the riot. Her husband also matched a photo of a rioter. It seems Callie reported the rioter to the FBI tip line and the person who took the call was the rioter’s wife. The FBI Agent who did that believed the same crap as the rest of them do.

The agent thought Biden stole the election. She called the Baker brothers because she thought they would “talk” to Callie and get her to retract her statements. The agent also claims she didn’t think they would kill her or be violent. They literally were known for violence and that somehow slipped her notice because she was so in love with the former president that she wanted him back in the office. But the agent was arrested. She will be facing years in prison for the part she played in a murder and the federal offense she created when she unmasked someone from the tip line. This woman gave the Bakers the information. Which she owned up to in the end and so that gave them leave to arrest the brothers.

There was just one issue with that. The brothers went on the run. Travis and Cole Baker took Jolene Baker and her son with them. The team was looking for them when they were hit. Someone began firing at them and the team followed this person once they stopped firing. They followed Jolene into a trap. It seems she and her brother-in-law were having an affair. They murdered her husband together and now they were trying to kill federal agents together. The team quickly realized they were about to be ambushed. They got out of the situation before anyone could be hurt. They also came back with military reinforcements and so the only thing that stopped them from going in guns blazing was the fact there was a child in there.

Brady was a teenage boy. His uncle told him that his dad was killed by the feds and then he sent him outside with a gun. Gaines found him. She convinced him to put his gun down because she showed him that his father hadn’t been shot and that his uncle most likely killed him with a chokehold. With Brady wising up to his uncle’s machinations, he walked away with the feds and his mom ultimately chose him over the cause by rushing after him. Travis tried to make one last stand and he was killed by a sniper bullet. The bullet saved Gaines’s life. She later thanked Ortiz for taking the shot and the team was able to call it a day.

LaCroix returned to his family where he found out his daughter got sent home for vaping. He hadn’t wanted to punish her because he thought she had learned her lesson and his girlfriend disagreed. She thought the teenager was pushing boundaries and will only get worse.