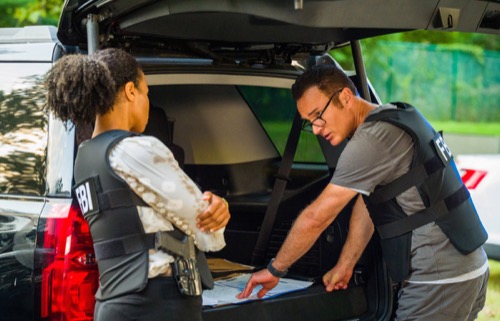 Tonight on CBS FBI Most Wanted airs with an all-new Tuesday, October 5, 2021 season 3 episode 3, “Tough Love,” and we have your FBI Most Wanted recap below. In tonight’s FBI season 3 episode 2 as per the CBS synopsis, “When a judge known for serving harsh sentences to juveniles is murdered, the team looks into his long list of cases in the hunt for his killer. Kristin faces family hurdles while resettling with her teenage daughter in New York City.”

A juvenile court judge was murdered in Ohio. He was first beaten, tortured, and then killed. His killer even made him wear a sign that said “criminal”. The judge’s name was Stuart Weaver. Judge Weaver was controversial because he carried zero tolerance for any offender. This included first-time offenders as well as low-level offenders and so he had a lot of enemies. LaCroix’s team had no problems with identifying the Unsub who killed Weaver. The young black man was following the judge. He sat in on his latest hearing and he waited in his car until Weaver left to follow him. The team knows what their killer looks like. They just didn’t know his name. The Unsub was in any of Weaver’s files and what was included in the files turned out to be proof that Weaver was corrupt.

Weaver became a zero-tolerance judge after he started to get paid to sentence kids to out-of-state juvenile detention centers. He was always hard before. But he became zero tolerance after the payments began and since then he’s been paid almost two million dollars. Weaver sent kids all over the country to these programs. One of the programs had a therapist who thought it was her job to tear down kids and so she was the next “victim” for the unsub. Molly Kendall was killed the same way as Judge Weaver. She was also found wearing a sign that said “soul crusher”. The only connection the two supposed victims had in common was a juvenile detention facility called Beech Mountain Academy.

Weaver sent kids there. Kendall treated kids there. The team went to the supposed school with photos of their Unsub and the director refused to say if he knew him because he couldn’t reveal any information on their patients. It was the janitor who identified the kid. He said their Unsub’s name was Luke Hadley and that he escaped a month ago. It turns out the facility tortures children. Refuses to feed them and then makes them fight for food. Puts them in solitary for months on a time. Ties them and lets them soil themselves. The correction center was a horrible place for children and that’s why the janitor didn’t let the director know that Hadley had a cell phone. It was counted as contraband. The janitor collected and he handed it over to LaCroix’s team.

The team used the cell phone to find out who Hadley was speaking with on the outside. They found Emily and they told her to contact Hadley for them. She didn’t want to at first. She had been at the Academy as well. She was a survivor and she met Hadley on a survivor’s webpage. He went there after his girlfriend committed suicide. His girlfriend Sarah Hayes had also been at the academy. She was sentenced to three years for getting into a fight at school with another girl and she was sentenced by Weaver. What the girl experienced at the place was enough to make her kill herself the moment she was released. This was the trigger for Hadley. Hadley didn’t have anyone besides the other survivors. His family wrote him off after he got sentenced.

Many of their families wrote the kids off. Hadley thought the same had happened to Sarah and so he went to Sarah’s mother. He planned on killing her too when she surprised him. She had seen the light. Sarah’s mother never thought her daughter would be harshly sentenced and she even hired a lawyer to get her daughter out of that hellhole. Hadley didn’t kill Sarah’s mother. He forgave her for Sarah’s death and tied her up just so he could steal her car. The FBI found the mother. She told them about the car and they chased it. Hadley had been with Emily. He asked her to shoot at the officers and she couldn’t and so he threw her out of the car in full view of law enforcement. Emily was killed. She was killed before she could reveal the rest of Hadley’s plan.

But the FBI got a warrant for the school. They believed Hadley would return there to possibly burn it down and so they found out his plan there. He kept a journal. In it, he put a picture of a guy in the eye of the hurricane. The team had known by then that Hadley was going after the eye of the hurricane and they asked the director about who was in the picture. The director was under arrest. He was arrested for abusing the children at the academy and he was only cooperative because they threatened to use it against him in court if he didn’t help. The director said the man in the picture was Eddie Groff. He owns the school. He created the program for how they treated the kids. Groff was the one behind everything and that includes payments to bribe a judge. The team later found Hadley torturing Groff.

They tried to talk him down. Hadley said it was too late for him and he killed himself. The academy was abruptly closed. The staff was all being investigated for child abuse and Groff faces corruption charges. The case came to a close but Special Agent Kristin Gaines was looking for a place to live in the city and her ex-husband suggested an apartment in his building. He said it would be better for their daughter. This way she could take the elevator to stay with him whenever Kristin had to leave the city on short notice and so Kristin agreed to take the apartment. She just didn’t know if it was going to end well with her ex or if they would be at each other’s throats again with living so close.