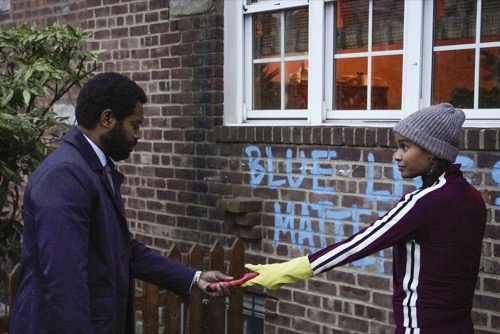 Tonight on ABC their new legal drama For Life inspired by the life of Isaac Wright Jr. airs with an all-new Wednesday, February 17, 2021, episode, and we have your All Life recap below.  On tonight’s For Life season 2 episode 9 “The Blue Wall” as per the ABC synopsis, “With Aaron and Marie facing threats from an increasingly hostile community, Aaron and his team double down by pursuing criminal charges against a high-ranking police officer they believe tried to cover up the shooting.“

The poor store owner. Sherwin Maloof offered Aaron and his team the video of Andy Josiah’s murder because he was told it was the right to do. Which it was. Sherwin’s video saved their case and unfortunately, the police retaliated. They later schemed to get Sherwin arrested. They sent someone into his store and they had her buy beer without identification. She looked thirty. She turned out to be a teenager and so Sherwin was arrested. He’s now facing a year in jail for selling alcohol to a minor. He could also lose his liquor license and that alone could sink his business. Sherwin couldn’t afford to lose his liquor license because most of his sales come from that. He has his own family to support and he couldn’t do that without a license.

Sherwin also knows that if he withdrew his testimony that he would be released. He rightly theorized the police would bring charges against him for authenticating the video and putting it in evidence. Sherwin told Safiya that maybe he shouldn’t testify. He thought they’d be able to protect him and they didn’t. Somehow it leaked that Sherwin was helping Aaron. Safiya and Wallace both apologized about that and they also told Sherwin that no one told him to sell alcohol to a minor. It’s not their fault he’s in trouble. The most they could do for him is get him a good lawyer to work pro bono and he was going to testify in their case. He’s already testified in front of a grand jury. If he changes his mind or tried to recant, they could subpoena him as well as press charges against him for perjury.

Sherwin has to testify now. He won’t like it. He may even resent it but it won’t change the fact that the video is now in evidence and that Aaron and his team can use it. They tried to use it to get to Officer Matranga. Matranga wasn’t the officer to fire that night. He was the guy who returned to his cruiser to run Andy’s ID and his partner was the trigger-happy one. Officer Lindsey has a history of being violent towards minorities. His lieutenant covered for him by hiding the complaints against him and now he’s just as guilty for what Officer Lindsey did. Aaron and his team wanted to go after both Lindsey and Lt Marco Diaz. They were even willing to offer Matranga full immunity if he turned on his men. They needed to cross the Blue Wall and why not Matranga.

Matranga has already shown remorse. He visited Andy’s widow and he tried to apologize to her for her husband’s death. It’s clear that he felt things could have ended differently. Aaron and Roswell made Matranga an offer of full immunity if he testified against his partner and his lieutenant. While Matranga was considering the offer, Aaron was pulled over by the police on his way home. They made him hang up his daughter and they took a long time in running his registration. Aaron was later late to get home. His probation officer could have held against him and instead he accepted Aaron’s excuse that the cops pulled him over. The probation officer also agreed to check up on things on his end and so Aaron won’t be getting into trouble. And that’s probably what those officers planned.

Aaron’s daughter Jasmine had been frightened for her father. She kept trying to call him and she was worried that the officers could have killed him and so she was so happy when he came home safe. Both she and Marie were scared of what those officers could have done. Anything can happen when a black man is pulled over by the police. Andy Josiah was proof of that and so Aaron redoubled his efforts on the case. He wasn’t going to just pin things on Matranga. He knew he had to speak to Andy’s son Marcel. Marcel was there the night that his father was gun down and right now he’s the only witness willing to talk. Aaron recorded Marcel’s testimony. He played Marcel’s thoughts for Matranga at a meeting with Matranga and his lawyer.

Aaron and Roswell again offered immunity. They showed Matranga the tape of that night and they even showed him the moment his lieutenant “talked” to him. It was clear Diaz was telling him to fall in line. Diaz was covering up what Lindsey did the moment he was called to the scene and he was the one who spoke to Sherwin. Aaron needed video from inside the shop. Only he didn’t want to pressure Sherwin any further because he felt they had done enough to his life and so Safiya did some maneuvering. She advised Sherwin that maybe it would be best if he visits his brother in Iran for a few weeks. They could still push to authenticate the tape without him. Sherwin also wouldn’t have to testify and so in exchange for this sweet deal – he just had to hand over inside footage of that night.

Safiya and Roswell wanted to go after Diaz more than officers. She wanted to show the conspiracy that occurred that night and she personally felt Diaz was more at fault because he was the one who put Lindsey back on the street in spite of knowing what he was. Safiya hadn’t told the others about the advice she gave to Sherwin. She kept that tidbit to herself and she got the tape of Diaz inside the store. Diaz had asked for the security camera. He was given a flash drive which he believed held the only evidence. He hadn’t known that Sherwin had a backup server or that Sherwin would give it to the prosecution. Now, Diaz is on the line for the coverup. Aaron was going to indict him alongside Lindsey and Matranga.

Matranga was given one last chance to turn on his partner. Aaron also spoke to Lindsey’s attorney and they almost worked out a deal. She wanted Lindsey to spend a year in jail. She needed to look good because she was using this job to gain notoriety however notoriety is a double-edged sword. No one wants to see black women get a racist cop off on murder. The attorney tried to work out a deal with Aaron and he refused to accept it because he believed Lindsey should go to jail for more than a year.

Aaron was under public pressure too. People were spray painting “Blue Lives Matter” on his house and he came home to find Marie washing it. Marie hadn’t stood by him the last time things got tough, but she told him that this time she was staying.