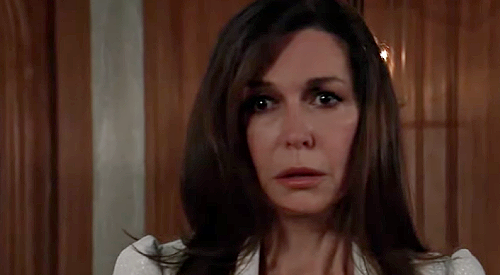 And as Maxie is busy blissfully planning the grand nuptials, Anna’s got something much more serious on her mind.

As GH viewers know, Anna is feeling very unsettled by what Dante Falconeri (Dominick Zamprogna) is up to these days, and although she can’t put her finger on what’s going on, she’s got a gut feeling that something’s awry.

And of course, Anna’s dead on, since Dante is working to help Liesl Obrecht (Kathleen Gati) investigate both Peter and herself.

Well, once Anna does a little more digging – which General Hospital spoilers make clear that she’s going to do – she’s bound to realize that Dante’s on a mission and that it has something to do with Peter.

Once Anna makes that connection, you can bet that she’ll be determined to get to the bottom of what’s going on and what Peter might be hiding.

Of course, the only problem with Anna getting to the bottom of Dante’s investigation is that ultimately, someone’s going to find evidence that implicates Peter.

That someone could very well end up being Dante, but if Anna gets one step ahead of Dante, or if she trails him and learns what he learns, then she could be in for a very ugly truth about Peter.

As GH viewers know, Peter is responsible for the jet crash that took Drew Cain’s (Billy Miller) life. And then Peter attempted to have Franco Baldwin (Roger Howarth) and Andre Maddox (Anthony Washington) killed in the OR at GH.

Of course, at the last minute, Peter reversed his decision and ended up barging into the OR and killing the hitman he hired in cold blood.

If Anna learns the startling truth about Peter, then she could face a real dilemma with the double wedding coming up. Anna would probably be torn about what to do on one level, but then again, Anna knows at this point that she’s not Peter’s mother – Alex Devane Marick (Finola Hughes) is.

Anna will know that Maxie deserves to know the truth about who she’s about to marry.

So, will Anna ultimately be the person who prevents Maxie from making a terrible mistake and marrying Peter? That would be pretty ironic, given how staunchly Anna has defended Peter against the likes of Robert Scorpio (Tristan Rogers) in the past.

But ultimately, we have to imagine that Anna would want to do what’s right and let Maxie make an informed choice about her future.

We’ll see what happens here, but it seems like Anna’s about to go down a path that might lead her to uncovering the truth about Peter. And then she’ll have a choice to make.

Do you think that Anna will end up being the person who keeps Maxie from marrying Peter? Stick with the ABC soap and don’t forget to check CDL regularly for the latest General Hospital spoilers, daily episode recaps, and news.