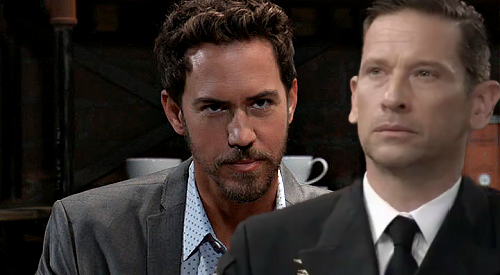 General Hospital (GH) spoilers tease that Franco Baldwin (Roger Howarth) will continue to be plagued by the voice of Peter August (Wes Ramsey) that he’s hearing in his head.

As GH viewers know, Franco recently had a mini meltdown outside of Sam McCall’s (Kelly Monaco) place when he repeatedly heard Peter’s voice saying, “Sorry, I have no choice.” The whole thing is scary and unnerving for Franco, and he doesn’t know what it all means.

Well, Dr. Warren Kirk’s (Jamison Jones) theory before he died was that Franco might be hearing something from Drew Cain’s (Billy Miller) past. This would make sense, given that Franco had some of Drew’s memories implanted in his brain for a time.

But it would seem that Franco might be hearing something from his own memory – specifically, from the time right after the memory transfer reversal procedure took place.

As GH viewers will remember, Franco (who was then calling himself Drew) agreed to have Andre Maddox (Anthony Washington) do a memory reversal procedure in the OR. But as Franco was laying there unconscious as the procedure was finishing up, a gunman hired by Peter burst into the OR to kill Andre and Franco.

Peter then burst into the OR and killed the gunman after having second thoughts about the whole thing.

Could Franco now be remembering Peter telling the OR gunman “Sorry, I have no choice?” If that’s indeed the case, then Franco would be recalling one of his own memories, not Drew’s.

The voice that Franco’s hearing could be the beginning of the memory of the OR shooting returning, and if that’s the case, it might not be long before Franco remembers more.

Of course, Franco wasn’t fully conscious at the time Peter shot the OR gunman, but he could conceivably remember Peter’s words coming right before the shot rang out.

Franco could ultimately be the one who brings Peter down, and depending on the timing of his memories coming back, Franco could even be the person who ultimately reveals Peter’s evil nature to Maxie Jones (Kirsten Storms).

For example, we could see a situation in which Franco feels compelled to tell Maxie what he’s learned about Peter after he realizes that Peter shot the OR gunman in cold blood.

It’s looking more and more like someone or something is going to bring Maxie’s nuptials to Peter to a screeching halt, and it could very well be Franco who makes the big reveal about Peter at the wedding.

We’ll see what happens here, and it will be interesting to see if Franco keeps digging to see what the voice that he keeps hearing means and when exactly he heard it. Perhaps Liesl Obrecht will help Franco get to the bottom of what the voice means.

Of course, if Liesl figures it out the way we’ve theorized it, then she could be a candidate for stopping the wedding, too!

Do you think that Franco will be able to make sense of what he’s actually hearing? Stay tuned to the ABC soap and don’t forget to check CDL regularly for the latest General Hospital spoilers, daily episode recaps, and news.