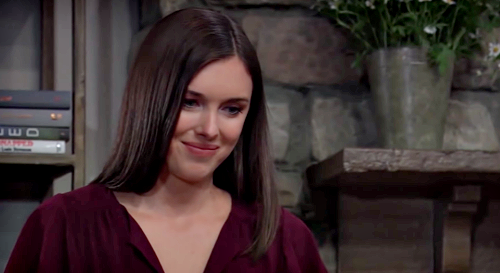 General Hospital (GH) spoilers tease that Brook Lynn Quartermaine (Amanda Setton) may confess the baby secret and force Willow Tait (Katelyn MacMullen) to keep a huge secret from Michael Corinthos (Chad Duell). This is the kind of thing that could set up some relationship trouble, so let’s mull over where this hot plot might be headed.

During the week of June 14-18, Brook Lynn will come clean to Willow in some way. We’ll see Brook Lynn decide honesty is the best policy during a conversation with Willow, so there’s the potential for her to admit the whole baby truth.

Brook Lynn might get caught talking to herself or “Bailey Quartermaine” aka Louise August (Harper and Scarlett Bloom) since she seems to do that pretty often. It’d be easy for Willow to overhear too much and demand answers.

Brook Lynn has been a nervous mess anyway, so she might decide she can trust Willow as a mother who’s also kept secrets for the sake of her child.

Willow knows what it’s like to do everything in her power to keep her baby out of an evil, manipulative man’s hands – namely Shiloh Archer (Coby Ryan McLaughlin), who was almost as bad as Peter August (Wes Ramsey).

Willow eventually found out her biological child was dead, but she worked just as hard to protect Wiley Quartermaine-Corinthos (Erik and Theo Olson) from Nelle Benson (Chloe Lanier).

Brook Lynn might appeal to Willow as a mom and help her understand the terrible situation Maxie Jones (Kirsten Storms) was in.

However, Brook Lynn might also warn that Willow can’t tell another soul – not even Michael. Although Willow’s good at keeping secrets from other people, things are supposed to be different with Wiley’s dad.

There’s a deeper level of trust between them as parents and lovers at this point.

Michael and Willow intend to build a future together eventually, so he’s not someone Willow wants to keep in the dark.

Nevertheless, Brook Lynn might push Willow to keep quiet – perhaps by arguing that if Michael doesn’t know, Willow won’t burden him with the same pressure of keeping the secret.

Brook Lynn may worry Michael will want to come forward with the truth, especially since the Quartermaine clan will continue to fall in love with “Bailey.”

Michael might even have a heart when it comes to Valentin Cassadine (James Patrick Stuart) since he knows what it’s like to be deceived about a child.

Nelle made Michael believe that Jonah aka Wiley was dead – and Valentin’s going to feel a similar sense of loss once the scheme comes to light. “Bailey” never even existed, but there’ll be a gaping hole in Valentin’s heart just the same.

Brook Lynn could fret over Michael’s Dudley Do-Right side winning out in this case and swear Willow to secrecy as a result.

Will Willow join the secret circle and hide the truth about “Bailey” aka Louise from Michael? As other GH news rolls in, we’ll pass along more updates.