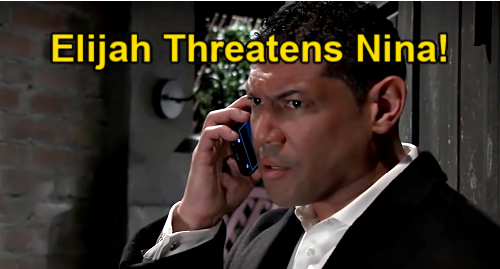 General Hospital (GH) spoilers reveal that Nina Reeves (Cynthia Watros) could run into some problems thanks to Elijah Crowe (Dan White). GH fans know Elijah was poised to make a deal with Phyllis Caulfield (Joyce Guy) and Lenny Caulfield (Rif Hutton) until Sonny Corinthos (Maurice Benard) swooped in with the save.

“Mike” won enough in a poker game to make sure Lenny and Phyllis could afford to retain ownership of The Tan-O, which certainly wasn’t the news Elijah wanted. That led to Elijah having Sonny followed and seeking info on him, but he’s come up empty so far.

However, Nina is now on Elijah’s radar – and it’ll be far easier to find out information on her. Elijah knows Nina runs Crimson, so that’ll serve as a great place to start. This could easily lead to Elijah figuring out who Sonny is once he does research on all Nina’s Port Charles connections.

Elijah might realize that Nina and Sonny have far more in common than Nina’s been letting on. Nina tried to act like she only just met Sonny, but Elijah could call her out for lying since Sonny and Nina share a grandson in Wiley Quartermaine-Corithos (Erik and Theo Olson).

Elijah may wonder what kind of game Nina’s playing, but he may also want to play one of his own. Will Elijah figure out that Nina’s hiding the truth from Sonny’s wife, Carly Corinthos (Laura Wright)? Will Elijah threaten to expose Nina’s secret to Sonny and everyone back in PC?

Elijah is pretty menacing, so he might even threaten to go after Wiley if he has to. Regardless, General Hospital spoilers say Elijah will lead to trouble, so he may blackmail Nina and force her to help him out.

Elijah might vow to expose Sonny’s identity along with Nina’s deception – unless she can convince “Mike,” Phyllis and Lenny to sell the bar.

If Nina doesn’t want to comply, that’s when Elijah might raise the stakes and threaten Wiley if need be. You can bet Elijah will do whatever it takes to get what he wants, so he could be a serious issue for Nina.

Will Nina face a blackmail plot and be forced to help Elijah? We’ll offer updates as other GH details emerge.