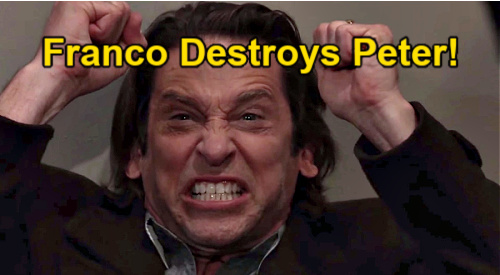 Of course, whether Franco ultimately survives this tumor remains to be seen, and there’s plenty of GH buzz that Franco could be dying and soon.

Certainly, if the tumor isn’t shrinking, then it’s probably only going to get worse, and that could lead to death and possibly some intense symptoms and behavior changes soon.

Interestingly, Franco is now headed away from his home with Elizabeth and the boys as a precautionary measure. As GH viewers will remember, Franco had an incident with Cameron Webber (William Lipton) in which he attacked Cam after a nightmare.

Now Franco is headed to the Metro Court for an evening before he goes for a more permanent stay at Shadybrook for treatment.

Of course, Franco being at the Metro Court for the evening means that he’ll be at the same location as the big double wedding in which Peter August (Wes Ramsey) is set to marry Maxie Jones (Kirsten Storms) and Anna Devane (Finola Hughes) is set to marry Finn.

And since Franco is having more intense memories of Peter’s voice these days, one wonders if Franco could somehow expose Peter at or near the wedding.

After all, Franco has been acting really strangely when he gets his memories of hearing Peter’s voice. At the hospital recently, Franco started talking about voices and acting erratically, which is what caused Alexis Davis (Nancy Lee Grahn) to rush after him with a syringe.

What if Franco experiences another episode at the Metro Court and blurts out some new memory of Peter’s voice – something that would totally incriminate Peter?

It certainly seems that something big is going down at this wedding, and at this point it really seems to be a matter of who is going to stop Peter from marrying Maxie.

Might that person be Franco, as he’s having another episode? Franco could even have a severe instance of hearing Peter’s voice – an episode that is life-threatening and simultaneously exposes Peter’s involvement in capturing Drew Cain (Billy Miller) in Afghanistan.

If Franco reveals what he’s remembering in front of the right people, then it could go a long way toward convincing Maxie that marrying Peter is a mistake.

We’ll see what happens here, but it sure looks like something big is going down at this wedding, and that it’s going to involve Franco in some way. Do you expect to see Franco reveal some inconvenient truth about Peter?

Stick with General Hospital on ABC and remember to come back to CDL for your latest GH news and spoilers.