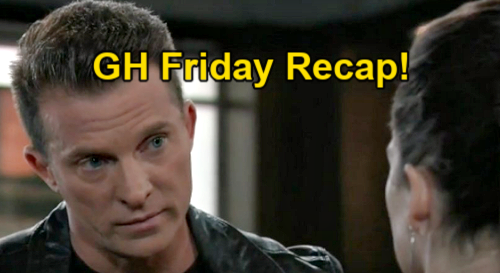 General Hospital (GH) spoilers recap for Friday, February 26, reveal that Anna Devane (Finola Hughes) was glum when Jordan Ashford (Briana Nicole Henry) came to get her to go to the Metro Court for the wedding.

Valentin Cassadine (James Patrick Stuart) arrived at Anna’s house, and Anna sent Jordan over to the hotel while she talked with Valentin.

Anna told Valentin that Peter August (Wes Ramsey) wasn’t the man she thought he was, and that he’s beyond their help.

“It’s up to us now to make sure he never hurts anyone again,” Anna said, telling Valentin about how Peter burned the incriminating evidence against him. “I’m done,” Anna said. “Peter has to face justice.”

Valentin thought that they needed hard proof of Peter’s crimes, and Anna lamented that Maxie Jones (Kirsten Storms) needed to know the truth.

“You could get Peter killed,” Valentin noted, saying that if Maxie found out the truth, then Jason Morgan (Steve Burton) would too. “So what do we do?” Anna asked.

As the men talked, Finn got a text from the GH lab saying that the DNA test results were in. Finn said that he had an emergency at the hospital and had to leave, but that he’d be back soon.

Outside Maxie’s dressing room, Britt Westbourne (Kelly Thiebaud) stopped Peter from entering, saying it was bad luck. Inside the room, Maxie ended a call with Felicia Scorpio (Kristina Wagner), who couldn’t be there.

Nina Reeves (Cynthia Watros) helped Maxie get ready for the wedding, and Maxie shared some of her fears with Nina.

As it turned out, James West (Owen and Curtis Rufca) had called Peter “daddy” in a picture he made for Maxie, and this upset Maxie because she didn’t know if Nathan West (Ryan Paevey) would want Peter to be a father to James.

Maxie said that she had visited Nathan’s grave and asked for Peter’s blessing, but that she didn’t get it.

Down in the Metro Court lobby, Sam McCall (Kelly Monaco) was talking with Jason when Damian Spinelli (Bradford Anderson) came in all glum about the wedding.

Across the lobby, Jordan and Curtis caught up awkwardly, and Sam eventually came along and mentioned the fact that she was buying out Curtis’ PI business.

Jordan was surprised, and Curtis told Jordan about it off-screen, then he said that he was buying a nightclub. After their conversation, Jordan got on the elevator and cried.

Back with Sam, she was talking with Jason and Spinelli when Peter and Britt walked up. Peter wanted to talk to Spinelli alone, so they stepped aside.

Jason had a moment alone with Sam, and he asked her what made Alexis Davis (Nancy Lee Grahn) go after Franco Baldwin (Roger Howarth) with the syringe. Sam reported that Franco had been agitated and was talking to himself. Jason thanked Sam for the information and left.

In Peter’s dressing room, he told Spinelli not to stay for the wedding. “I won’t have you lurking and stirring up trouble – go away now,” Peter said.

Back in Finn’s dressing room, Gregory told Chase about how he didn’t see Jackie in the 24 hours before their wedding. Chase wondered where Jackie had been.

Back with Maxie and Nina in Maxie’s dressing room, Spinelli called to tell Maxie that he was ill and couldn’t stay for the wedding.

Maxie then realized that Nina was probably having difficulty being at the wedding, so she uninvited Nina. Later, Sam and Britt came to Maxie’s room, but no one was there.

At the hospital, Lesley Webber (Denise Alexander) and Laura Collins (Genie Francis) sat in the boardroom musing that Cyrus Renault’s (Jeff Kober) day was about to get a whole lot worse. Laura noted that Lesley and Monica Quartermaine (Leslie Charleson) had worked together on this.

At the nurses’ hub, Cyrus marched up to Jackie Templeton (Kim Delaney), all mad about Jackie’s news article about him in which she interviewed Florence Grey (Annie Abbott).

Cyrus demanded to know where Florence was, but Jackie said that Florence didn’t want to see him. Cyrus fumed.

Cyrus headed to the board meeting, but when he got to the boardroom, he found only Laura and Lesley there. “Where’s the board? We had a vote scheduled?” Cyrus asked.

Laura said that it was all over, and that the board read Jackie’s article and decided to turn Cyrus down. “GH won’t submit your drug to the FDA,” Laura announced happily.

Cyrus was peeved, and after he stormed out, Lesley told Laura that she was going to see Lulu Spencer (Emme Rylan) to consult with her doctors. Laura and Lesley hugged warmly.

As Cameron and Franco were talking about Franco’s attack on Cameron last night, Elizabeth walked in and was horrified, then she learned that Cameron didn’t want to go to college.

Franco intentionally let it slip that Cameron got into Stanford, and Elizabeth was interested, but she wanted to hear about Franco’s attack on Cameron instead. Franco explained, and Cameron downplayed it.

Franco said he was leaving, and that for tonight he’d stay at the Metro Court, then he’d go to Shadybrook.

Jason arrived to ask Franco some questions, and Cameron went into protective mode, reluctantly leaving the room when Franco insisted. Jason asked why Franco was talking to himself on the day of Alexis’ syringe attack.

Franco said that he’s hearing a voice in his head – specifically Peter’s voice and that it was likely a leftover Drew Cain (Billy Miller) memory.

At the cemetery, Maxie went to Nathan’s grave. “It’s my wedding day, but I had to come check in with you first,” Maxie said. Maxie told Nathan that she didn’t know what to do, and that she needed his guidance.

Suddenly, someone walked up to Maxie, and she reacted with surprise. “Oh my God, what are you doing here?” Maxie said.

That was a terrific episode of General Hospital, and there’s much more coming next week, so stay tuned! We’ll give you updates throughout the weekend as we get more General Hospital spoilers, updates, and news.