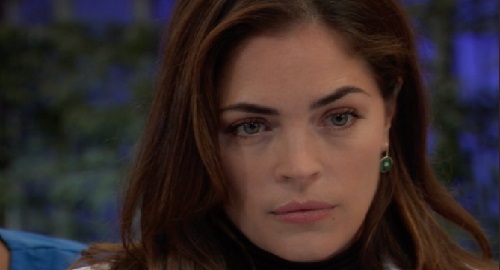 First, it looks like Josslyn Jacks (Eden McCoy) will do some taunting. “I have something for you,” Joss says in Friday’s preview video. She seems rather smug about it, so this could be a conversation where Josslyn makes it clear that Esme is still going down.

However, Esme will do her best to sway Cameron when she tracks him down and insists she needs him desperately. Perhaps Esme will hope Cam can convince Joss to back off since she’s in enough trouble as it is.

Spencer Cassadine (Nicholas Chavez) is doing his best to protect Esme by taking all the blame and acting like she merely followed orders.

GH fans know it was actually Esme’s idea to torch Ava Jerome Cassadine’s (Maura West) car and plant that hospital badge, but she committed crimes any way you slice it!

Spencer will be arrested at some point in the coming episodes, so Esme will work overtime as she tries to avoid charges herself. Until then, Trina Robinson (Sydney Mikayla) will deliver some shocking news and face a grilling session.

“You can’t drop that kind of bomb on me and play it coy!” Portia Robinson (Brook Kerr) exclaims in Friday’s preview clip. Trina looks rather upset, so her bomb may involve Spencer’s takedown and the fact that she still has deep feelings for him.

Portia will have a heartfelt conversation with Trina and could perhaps understand that love is complicated sometimes. That goes for Britt as well since she still has feelings for Jason, but she’ll tell someone that she’s nobody’s second!

Britt won’t be keen on taking Jason back just because things are over with Carly Corinthos (Laura Wright).

Nevertheless, Jason and Britt will work together to save Liesl Obrecht (Kathleen Gati) down the road, so there’s a good chance teaming up will bring them closer once again.

As for Nina Reeves (Cynthia Watros), she’ll pay someone a visit with a goal in mind. “I imagine that I’m the last person you want to see right now,” Nina admits in Friday’s preview video.

It could be Phyllis Caulfield (Joyce Guy) since we know her run isn’t over – and Nina could really stand to apologize once again. Maybe Nina can even get their friendship back on track since Phyllis is a pretty forgiving soul.

As for Carly and Sonny, they’ll greet a special guest at home. Sonny will declare this a pleasant surprise, so Phyllis definitely fits as the unexpected visitor.

This could give Sonny an opportunity to introduce Carly and let her thank Phyllis for taking such good care of her husband.

Over with Ava, she’ll hint at a visitor of her own and leave Nikolas Cassadine (Marcus Coloma) looking puzzled. Of course, that should be Avery Corinthos (Ava and Grace Scarola) since the threat to her safety was never real.

Now Ava and Avery can reconnect without fear, but Nikolas will still be sorry about the time they spent apart.

Spencer will also approach someone looking to make a deal, so Friday’s episode will be packed full of action. As other GH updates emerge, we’ll keep you posted.

General Hospital spoilers say some exciting developments are ahead in several hot stories, so stay tuned.

CDL will have all the scorching General Hospital spoilers, updates and news you need, so stop by often.