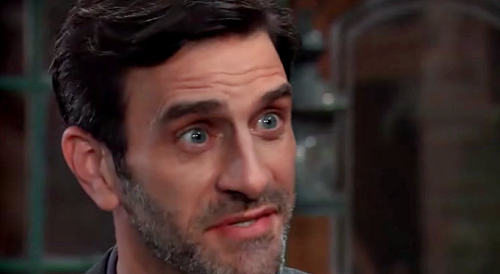 GH fans will recall that Joey was Vincent Novak’s (Glenn Taranto) wildcard nephew, who ended up being more trouble than he was worth.

Vincent and the rest of the Novak clan thought Joey was too problematic, so he was shipped out of the country shortly before Jason Morgan (Steve Burton) and Carly Corinthos’ (Laura Wright) wedding.

However, a lot has changed since we last saw Joey. The Novaks have been mourning the loss of their leader and are perhaps ready to avenge Vincent’s death.

Joey may not have been too happy with Vincent for sending him away, but that was still his uncle. Family is everything when it comes to many mob clans, so Joey may lead the charge of getting revenge.

Joey tends to be overconfident, so he might think he’s a worthy successor for Vincent and plan to prove it by taking on the Corinthos organization himself.

Of course, Joey will be playing with fire by going up against Sonny Corinthos (Maurice Benard)!

Jason can be stone cold when he wants to be, but he’s more pragmatic and leads with his head rather than his heart in most cases.

Sonny, on the other hand, is more impulsive and arguably far more dangerous as a mob boss.

That’s especially true since Sonny has been living as mostly peaceful “Mike” for so long in Nixon Falls. This could end up being a situation where Sonny feels he has something to prove.

When Joey resurfaces on November 3, Sonny will initially dismiss this guy as a foolish nobody. He may not think the Novaks in general are going to be an issue since deceased Vincent left behind a vulnerable organization.

Nevertheless, it might be a mistake to underestimate Joey. What Joey lacks in intelligence and finesse he makes up for in recklessness and confidence.

Joey previously got too close to Josslyn Jacks (Eden McCoy), so he’s the kind of guy who doesn’t believe anything or anyone is off-limits.

Sonny may eventually realize Joey must be eliminated once this turns into a new mob battle.

This could be Sonny’s chance to show he’s still got it – that he can handle the Corinthos organization the same way he always has!

CDL’s where you want to be for sizzling General Hospital spoilers, news and updates, so visit us often.