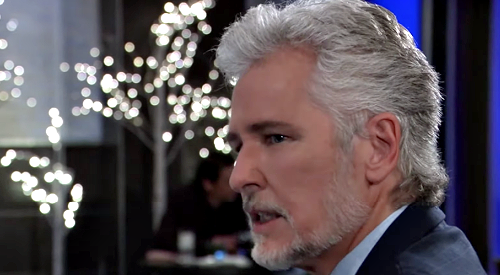 General Hospital (GH) spoilers tease that Martin Grey (Michael E. Knight) will realize he has to make a bold move if he expects to get his mother back. Florence Grey (Annie Abbott) has been kidnapped, so that’s obviously been a huge cause for concern.

Although Laura Collins (Genie Francis) has assured both Martin and Cyrus Renault (Jeff Kober) that Florence will be safe, neither one of them is thrilled about this whole hostage situation.

Cyrus’ response was to shoot up a warehouse full of men as a gesture of goodwill, but it was really more of a power play. It may have benefited Sonny Corinthos’ (Maurice Benard) organization, but it’s clearly not the way Jason Morgan (Steve Burton) does business.

Jason knows he can’t give an inch now or Cyrus will take a mile!

As for Martin, he’ll take a different approach when he goes to Jackie Templeton (Kim Delaney) and pitches a new story. It seems like Martin will think the best way to get Florence back is to put public pressure on Jason.

Martin doesn’t realize Carly Corinthos (Laura Wright) was behind the snatching and arranged everything, but Jason’s in just as deep now anyway.

General Hospital spoilers say Martin will pitch this idea in an attempt to expose the kidnapping saga and perhaps see if anyone’s got any information that could lead to Florence’s safe return.

Once Martin gives Valentin Cassadine (James Stuart) updates, Valentin will insist he’s got a better plan. He’ll feel confident that something he’s about to set in motion will lead to Martin getting his mom back promptly.

GH fans can expect Valentin’s scheme to involve Nina Reeves (Cynthia Watros) and Jasper “Jax” Jacks (Ingo Rademacher). We also know Valentin will offer what Jax and Nina consider to be bait during the week of January 25-29.

Nina will be wise to the fact that Valentin’s scheming and will resist this bait along with Jax – at least at first.

Since Valentin will urge Martin to retract his exclusive story offer, does that mean Valentin has plans for another hot story instead? General Hospital spoilers say Peter August (Wes Ramsey) will print an unsettling article in the week ahead – and Valentin has some sway with Peter that could nudge him into it.

It’s possible Valentin will use that article to implicate Jax as someone tangled up with the Corinthos clan – someone who’s a little too close to Carly, Jax’s ex-wife and current mob queen of Port Charles.

Valentin might suspect Carly is the person Martin really needs to be pressuring on all the kidnapping drama. If it makes Nina worry about Jax’s bond with Carly, then that’s a bonus.

Of course, there could be some other way Valentin chooses to handle this, but we do know whatever method he picks will leave him at odds with Carly and the rest of the Corinthos clan.

Jax will also find himself feeling uneasy despite the front he puts up with Nina, so it sounds like Valentin’s going to make a mess!