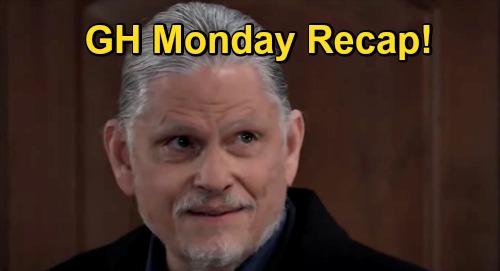 General Hospital (GH) spoilers recap for Monday, January 4, reveal that Carly Corinthos (Laura Wright) and Jason Morgan (Steve Burton) continued their argument at the Corinthos house, as Carly insisted that she solved some of their problems.

Before Jason could find out what Carly was talking about, he got alerted that Cyrus Renault (Jeff Kober) was on the grounds.

“It worked,” Carly said. “What worked?” Jason asked. Carly went to the door and let Cyrus in, who immediately went to Jason and demanded to know where his mother was. Jason said that he had no idea where Florence Grey (Annie Abbott) was, but Cyrus didn’t buy it.

After Jason and Cyrus argued for a while, Cyrus turned to Carly.

“You’re awfully quiet, Carly,” Cyrus said. Carly said that she felt that Florence would find her way back to Cyrus, and Jason realized that Carly was behind this. Cyrus fumed that Sonny Corinthos (Maurice Beard) wouldn’t have kidnapped an elderly woman. “I’m not Sonny,” Jason said coldly.

After Cyrus stormed out, Jason lashed out at Carly.

“We needed leverage, and now we have it!” Carly insisted, telling Jason the story about how Laura Collins (Genie Francis) is Cyrus’ half-sister. Carly said that she had Damian Spinelli (Bradford Anderson) arrange Florence’s transfer to a safe house, and that Bobbie Jones (Jacklyn Zeman) was caring for Florence.

Jason was furious, and he said that he either had to give Florence back or play it out, and that if he played it out then Carly couldn’t be involved. Carly reluctantly agreed, and she said that she wasn’t sorry.

“This is a line I never thought I would cross, and you just crossed it for me!” Jason fumed, storming out of the room.

Soon, Alexis Davis (Nancy Lee Grahn) fumbled at the door, and Nikolas let her in. Ava immediately lashed out at Alexis, saying that Alexis rebuffed Julian and blamed him for all her problems.

Ava kept sniping at Alexis until Nikolas stepped in and said that taking it out on Alexis wouldn’t ease her pain. Alexis overheard the conversation, and in her drunken state, she accused Ava and Nikolas of falling in love.

Ava admitted that they had, and she poured herself and Alexis a drink. Alexis needled Ava about her relationship with Nikolas, saying it would crash and burn.

Alexis compared her doomed relationship with Julian to Ava’s relationship with Nikolas, which irritated Ava. Nikolas offered to see Alexis to her ride share, and Alexis got the final word in, saying that Ava and Nikolas were addicted to each other and that it would end badly.

Afterwards, Ava and Nikolas declared that they were totally different from Alexis and Julian.

Jordan apologized to Portia, and she tried to explain that she and Marcus Taggert (Asante Jones) were just trying to protect Trina Robinson (Sydney Mikayla). Portia griped that Jordan had destroyed Trina’s faith in her father.

Portia went on, saying that she was Trina’s mom and had the right to know about Taggert being alive. Jordan said that she and Taggert had done what they thought was right, and she noted that Taggert was being charged with fraud to keep him in custody and safe from Cyrus.

Portia then gave Jordan some advice, saying that her marriage to Taggert broke up because they couldn’t share their life together and Taggert’s job always came first. Jordan figured that Portia thought the same could happen between her and Curtis Ashford (Donnell Turner). Portia hoped that it wouldn’t.

At the Metro Court, Laura visited with Martin Grey (Michael E. Knight), wondering if Martin would give her leverage against Cyrus. Laura made a big appeal, but Martin said that he dealt in evidence, and that Cyrus had been exonerated.

Laura wondered if Martin was working for Cyrus, but Martin denied it, saying that he simply owed Cyrus for financially supporting their mother.

Cyrus then rushed into the restaurant, saying that their mother was missing and that “they” kidnapped her. Cyrus turned to Laura, saying that this was probably all on her.

Laura denied it, and Cyrus figured that Laura told Carly where Florence was. Laura looked aghast as Cyrus explained that Carly probably passed the information onto Jason, and Jason took Florence.

Laura rushed off, telling Cyrus that she’d get to the bottom of this and locate Florence. “If anything happens to her, the fact that you’re my sister won’t help you,” Cyrus seethed.

After Laura left, Martin noted that Cyrus really seemed worried, but he wondered if it was because he was worried about Florence’s safety or just that she might not ever forgive him.

As Jasper “Jax” Jacks’ (Ingo Rademacher) house, Jax disconnected from a call with Josslyn Jacks (Eden McCoy), who was refusing to go to Australia with him. Nina Reeves (Cynthia Watros) emerged and counseled Jax about letting Josslyn make her own informed decisions – after all, Josslyn is 18 now.

Jax got all ruffled and said that he was going to take Josslyn away whether she liked it or not. Nina said that it would be a terrible mistake, and that Josslyn was a strong, brave young woman who could make up her own mind. Just then Carly arrived, and Jax grumped about what’s going on with Sonny and whether all hell was about to break loose.

Back at the Corinthos house, Laura arrived looking for Carly. Jason answered the door and told Laura that Carly wasn’t there. “Fine, you’ll do,” Laura said, facing Jason defiantly.