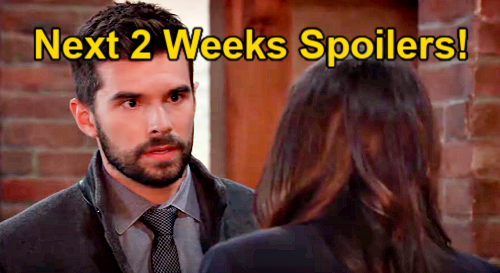 During the week of November 8-12, Diane Miller (Carolyn Hennesy) will voice her suspicions about Carly Corinthos’ (Laura Wright) desire for mob power.

Diane will think Carly misses being in charge – and that may be true on some level despite Carly’s relief that Sonny Corinthos (Maurice Benard) is home.

On Cassadine Island, Jason Morgan (Steve Burton) will recruit Drew Cain (Cameron Mathison) for a plan to handle Peter, but that should be tricky since Peter has the ability to activate Drew for killer missions.

In fact, it looks like Peter will want to show off the control he has with a dangerous demonstration.

Peter will want Jason to know he’s in charge of Drew, but maybe Drew can fight off the conditioning eventually using the power of his love for Scout Cain (Ella Ramacieri).

Back in Port Charles, Maxie Jones (Kirsten Storms) and Brook Lynn Quartermaine (Amanda Setton) will do a little more conspiring. They have a plan involving Kip (Artie O’Daly) the bartender, who does some acting jobs as a side hustle.

Kip will play a key role in Brook Lynn and Maxie’s plan to neutralize Gladys Corbin (Bonnie Burroughs), but this plot is going to head downhill quickly. That’ll partly be due to Austin Gatlin Holt (Roger Howarth) and his growing suspicions about the secret Gladys knows.

Over with Phyllis Caulfield (Joyce Guy), she’ll be blown away by Sonny’s offer. Sonny will push Phyllis to accept Charlie’s Pub as a fresh start and a way to repay all her Nixon Falls kindness.

When Trina is less than enthusiastic about the idea, Joss will be surprised. She’ll wonder why Trina isn’t happy for her, so Trina may admit she thinks this is more about Josslyn having something to prove to Esme Prince (Avery Kristen Pohl).

By the time Josslyn and Cameron have that time alone they planned on, Joss may see Trina’s point.

There’s a good chance Cam and Josslyn won’t get to the next level in their relationship just yet. Esme can use that to her advantage and keep raising all kinds of concerns, especially for Cameron.

Esme will also face off with Trina at the gallery, which isn’t surprising considering Trina’s words convinced Spencer Cassadine (Nicholas Chavez) to walk away from his father without a dirty dime.

Spencer is a prince no more – and GH spoilers say Esme will blame Trina for that!

Back with Austin, he’ll deliver some info to Valentin Cassadine (James Patrick Stuart). Although Austin may not have all the details, he may think Valentin should know about Brook Lynn’s deception.

It doesn’t look like Valentin will find out the paternity bombshell at that point, but he should know trouble’s brewing.

As for Chase, he won’t buy Brook Lynn’s story during the week of November 15-19.

Gladys will also make a stunning discovery and up the ante when it comes to her demands. It sounds like the lies involving potential fake “baby daddy” Kip will be a total bust and leave Brook Lynn facing more pressure.

At The Savoy, Curtis will get a special visitor and the shock of his life. There’ll be some massive revelation that leaves Curtis reeling, so it may be time for “Marshall” (Robert Gossett) to reveal his true identity.

It seems the mystery man is actually Curtis’ “dead” father, so he should have quite a tale to tell.

Back with Maxie, she’ll struggle to deal with Austin’s questions and will worry her secret’s ready to blow. Chase will also start putting the puzzle pieces together, so he’ll be on the verge of figuring out “Bailey Quartermaine” is actually Louise.

Gladys will also pay Valentin another visit just before Brook Lynn is backed into a corner. Valentin should soon learn “Bailey” isn’t really his daughter, but maybe Chase will step up as an alternative faux father.

Next, Trina’s special event will get underway. She’ll be excited about the National Geographic’s Photo Ark exhibit, but the night will take a difficult turn for Sasha. Will Sasha get stuck giving birth at the gallery?

Robert Scorpio (Tristan Rogers) will pass along some shocking news to Valentin and Anna Devane (Finola Hughes) later, so that could involve some of the mayhem happening on Cassadine Island.

Things will indeed spiral out of control, so there’ll be some life-and-death stakes and jaw-dropping moments.

CDL will have all the hot General Hospital spoilers, updates and news you need, so check back often.