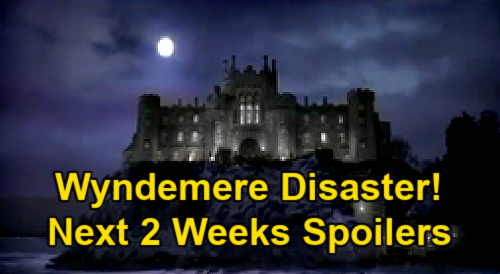 General Hospital (GH) spoilers for the next two weeks, April 19-30, tease that we’ll see some heated moments and dropped bombs. During the week of April 19-23, Scott Baldwin (Kin Shriner) will try to get through to Cameron Webber (William Lipton).

After Cam has another big fight with Josslyn Jacks (Eden McCoy), Scott will push Cam to see that Joss is right – that Jason Morgan (Steve Burton) didn’t kill Franco Baldwin (Roger Howarth). Scott will run down the list of reasons why Jason just doesn’t make sense as the culprit.

Scott may admit he believes Peter August (Wes Ramsey) is responsible for murdering Franco instead, but Cam just won’t buy it. He’ll be too hung up on the deal Jason struck with Franco and won’t open his mind to any other deadly possibilities.

At Pentonville, Anna Devane (Finola Hughes) will fill Jason in on her difficult situation – at least as much of it as she can safely reveal. Anna will admit that Peter has the upper hand, but she can’t reveal the details to Carly Corinthos (Laura Wright) without endangering the affected person even more.

Of course, GH fans know it’s Harrison Chase (Josh Swickard) who needs the antidote due to the poison he ingested. Anna can’t have Carly derailing things by going after Gladys Corbin (Bonnie Burroughs) and proving Gladys is linked to Cyrus Renault (Jeff Kober).

Cyrus and Peter are too tangled up right now, so Anna will know they have to be careful. It looks like Jason will agree to explain everything to Carly, who’ll pay him a visit next and inform him of a new plan.

No matter what happens with Nikolas Cassadine (Marcus Coloma) and his Cyrus agreement, Carly will have a strategy she shares with Jason – one he isn’t going to like at all!

Over with Molly Lansing-Davis (Haley Pullos), she’ll consider her future with TJ Ashford’s (Tajh Bellow) help. Molly will contemplate a big career move, so she’ll definitely want TJ’s opinion on what to do.

Other General Hospital spoilers say Chase will go from concerned about his future with Willow Tait (Katelyn MacMullen) to convinced it’ll be a bright one.

Since Chase’s feelings will change along the way, Willow may offer reassurance about their next chapter and keep quiet about her steamy reconnection with Michael Corinthos (Chad Duell).

During the week of April 26-30, Valentin Cassadine (James Patrick Stuart) will do some eavesdropping. He’ll listen in on a significant conversation that’ll provide some sort of advantage. Perhaps this could be the key to turning the tables on Peter.

As for Hamilton Finn (Michael Easton), he’ll exhibit some behavior that Elizabeth Baldwin (Rebecca Herbst) finds confusing. Liz will witness some unusual warning signs and wonder what’s really going on with the doc. By then, Finn may be scrambling to deal with Peter and the poison saga.

Meanwhile, Scott will need some guidance, so he’ll hope Laura Collins (Genie Francis) can help him out. Scott may ask if Laura has any tips on how to help Cameron see the light about Franco’s killer and perhaps focus on something else for a change.

However, Cameron will remain furious with Jason and will ultimately unleash his fury on him. Assuming Jason is still locked up at that point, Cameron may want to look him in the eye and vow revenge.

Although Jason will deny killing Franco, will there be anything that could change Cameron’s opinion?

While Cam decides what to believe, Dante Falconeri (Dominic Zamprogna) will open up to Sam McCall (Kelly Monaco). As for Nikolas and Ava Jerome Cassadine (Maura West), they’ll have a reason for some marriage conflict.

Nikolas and Ava will also wind up hosting an angry, awkward family dinner at Wyndemere, so what could possibly go wrong? A whole lot since this is Port Charles, where no one just has a normal dinner party!

General Hospital spoilers say Maxie Jones (Kirsten Storms) and Brook Lynn Quartermaine (Amanda Setton) will ultimately put their heads together. It sounds like Maxie will catch on when it comes to Brook Lynn not having a bun in the oven.

Maxie and Brook Lynn will debate some pros and cons as they decide whether they’re going to be a team.

Finally, Nina Reeves (Cynthia Watros) will find herself feeling protective of Sonny Corinthos (Maurice Benard) and the new life she’s building in Nixon Falls. General Hospital spoilers say Nina will stick around and grow even closer to “Mike,” so she’ll set herself up for more drama down the road.

As other GH news comes in, we’ll offer updates. The next two weeks will bring some fantastic episodes, so don’t miss all the action. CDL will have other terrific General Hospital spoilers, updates and news, so pop back in frequently.