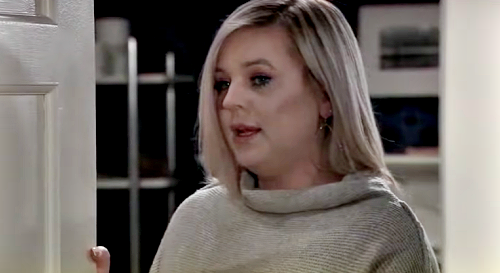 General Hospital (GH) spoilers tease that Maxie Jones (Kirsten Storms) is focused on one goal only at this point in her difficult story – and that’s protecting her unborn baby from Peter August (Wes Ramsey).

Of course, Maxie wants to keep James West (Curtis and Owen Rufca) safe as well, but he’s got a bit of a safety net already since he’s Nathan West’s (Ryan Paevey) biological child, not Peter’s.

Likewise, Georgie Spinelli (Lily Fisher) will be fine with Damian Spinelli (Bradford Anderson) watching out for her. Peter has never taken much interest in Georgie – and he’s always felt like he’s living in Nathan’s shadow in many ways when it comes to James.

The point is Peter doesn’t really care about Maxie’s kids without him. Peter cares about his unborn daughter and will care even more once she arrives.

If Peter survives and sticks around to see Baby Lou being born, there’ll be a serious threat to this kid’s safety and well-being.

Maxie insisted protecting her little girl was the priority – and General Hospital spoilers say Maxie will find ways to reaffirm that stance during the week of March 15-19. However, GH writers could be setting the stage for major trouble.

Maxie’s goal of protecting the child Peter fathered may not pan out since Baby Lou is the one thing Peter has left.

Now that Maxie has turned her back on Peter, he can no longer spin his web of lies and manipulate Maxie into thinking he’s a great guy.

Nevertheless, Peter could start fresh with this new baby. He’d have a child to mold into his own image – someone who would accept him and wouldn’t judge him.

Peter craves love at his core and has done some terrible things to get it and keep it. There’s no reason to think that Peter will stop at this point. It’s hard to imagine any scenario where Peter’s around and doesn’t make a move to kidnap this baby.

As long as Peter’s breathing and still free when this child’s born, Lou is going to be at risk. Will Maxie’s joy over bringing Baby Lou Into the world turn into panic once Peter snatches their daughter?

Peter might decide to flee Port Charles with just Lou since Maxie no longer wants anything to do with him and wants to keep their child away. We’ll deliver updates as other GH news rolls in.