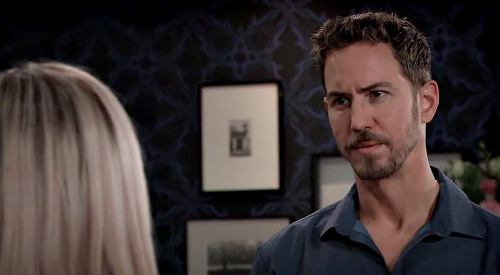 General Hospital (GH) spoilers tease that Peter August (Wes Ramsey) will plan to kidnap Maxie Jones (Kirsten Storms) and will be willing to risk his capture for a reunion. Will this villain make it out of Port Charles with his obsession? Let’s discuss Peter’s mental state and where the story may go from here.

It’s obvious that Peter has become increasingly fixated on the idea of having the family he always dreamed of.

It seems Peter views that as an easier task to accomplish since he knows where Maxie is.

Robert is especially dangerous as far as Peter’s concerned since he’ll absolutely shoot to kill!

All signs point to Peter getting off Cassadine Island, but he’s lost his secret weapons as well.

Peter was counting on Drew Cain (Cameron Mathison) to snatch Maxie for him, but that won’t be possible now that he’s lost control of his hostage.

Peter will also have to face the realization that even if he kidnaps Maxie himself, he no longer has the power to program her with Liesl Obrecht’s (Kathleen Gati) help.

However, Peter is unhinged and determined to make his dastardly dreams come true. He might resolve to just kidnap Liesl all over again and take her along for the ride.

On the hand, Peter may decide he can win Maxie over with time and effort. He might ditch the whole programming idea and have faith that he can make Maxie love him again on his own.

Whatever the case, Peter won’t just ride off into the sunset after this Cassadine Island disaster. He won’t stop until he gets what he wants or dies trying!

On December 3, Maxie will be shocked by the person she finds. The show’s going out of their way to be cryptic, so there are seemingly two good options.

One might involve a surprising encounter with Drew, who could warn Maxie that Peter’s promised to come for her. Drew may want to fill Maxie in on his experience with Peter and make sure she understands the danger.

Nevertheless, we have to consider the possibility that Maxie’s run-in will involve Peter himself. Peter may waste no time in showing back up in PC and snatching Maxie.

In that case, Maxie might even surrender to Peter if she feels it’d be better for Louise. The further away from Port Charles Peter is, the better Maxie will feel about her daughter’s safety.

That would allow GH to keep playing Brook Lynn Quartermaine (Amanda Setton) and Harrison Chase’s (Josh Swickard) part of the story for a while.

Maxie might land at a brand-new hostage site out of town and face a true separation from her daughter.

Naturally, it’s also possible someone will intervene before Peter has a chance to escape Port Charles with Maxie.

Even Maxie herself might resolve to take Peter down once and for all! There’ll be plenty of exciting ways to take the story, but a Maxie kidnapping plot is destined to happen no matter what.

General Hospital spoilers say Maxie will end up in a tight spot with Peter, so stay tuned.

CDL’s where you want to be for scorching General Hospital spoilers, updates and news, so drop by regularly.