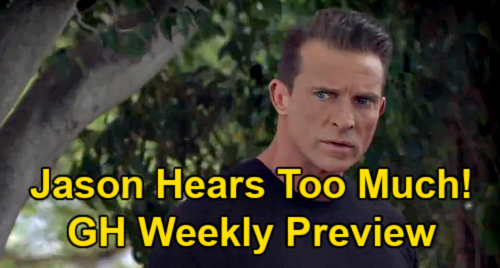 General Hospital spoilers reveal that the preview for the week of July 19 to July 23 teases a secret that could unravel. Valentin Cassadine (James Patrick Stuart) shows he means business and Anna Devane (Finola Hughes) demands answers.

As Hamilton Finn (Michael Easton) and Elizabeth “Liz” Baldwin (Rebecca Herbst) hope they’re in the clear, their chat could be overheard.

GH spoilers reveal that Valentin and Anna are in New York this week. They have a lead on where Peter and Maxie Jones’ (Kirsten Storms) baby could be.

Of course, there are a lot of secrets in Port Charles, including Maxie’s baby not really being missing and Peter August (Wes Ramsey) actually being allegedly dead.

Valentin and Anna are trying to get answers and believe they can get them from one man. They question the pilot, David Hopkins, who was flying the helicopter the day Peter went missing.

In fact, Valentin is in no mood to play around and shows that he means business. The pilot nearly loses his arm, but will he open up about what he knows?

The preview shows Anna is getting just as fiery as Valentin. She doesn’t break anyone’s arm, but she does get quite confrontational.

Getting in David’s face she points her finger at him and demands to know what happened to Peter. Little does she know that the truth will be shocking to everyone and could create a moral dilemma.

The man Anna almost married and someone she still cares for very much is directly involved, who just happens to be Finn.

Hoping They’re In The Clear

General Hospital spoilers reveal that the preview shows Finn and Liz talking in the park. Last week, July 12-16, Finn appeared as if he was going to tell Anna the truth about Peter.

However, the conversation was interrupted and she jetted off to find Maxie’s baby with Valentin. Liz tries to convince Finn – as well as herself – that they are probably in the clear.

However, the GH weekly preview quickly zooms over to Jason Morgan (Steve Burton), who appears to be in the same area with similar trees in the background.

This could be creative editing but the GH weekly preview makes it look like Jason could actually hear much of what is said between Liz and Finn.

Finn is getting worried and he’s also feeling guilty. This storyline is directly connected to Maxie handing her baby over to Brook Lynn Quartermaine (Amanda Setton).

The separation is literally making Maxie mad and we’re not sure how much longer she can go through with this scheme. It seems like this Baby Louise Swap storyline is wrapping up.

However, with soaps that just means other bombshells are going to drop and we will probably get new mysteries that branch off from this one.

We do see Maxie holding her baby, but that doesn’t mean she gets her baby back, in fact it’s more likely a goodbye as leaves town.

We know Maxie gets a special visit with the baby everyone believes is Bailey Quartermaine (Harper and Scarlett Bloom) this week. So, we will have to wait and see what happens.

“I need you to tell me what happened to Peter August.” #GH pic.twitter.com/Il9GhlRRZH