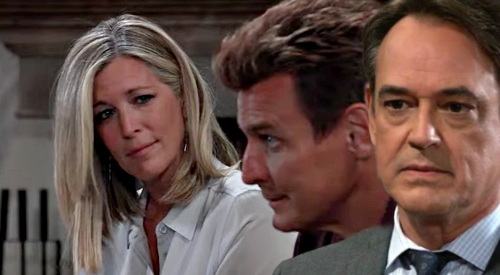 As GH viewers know, both Carly and Jax know a lot more about Nelle Benson Jerome’s (Chloe Lanier) death than they’re telling anyone. Nobody killed Nelle per se, but Carly and Jax know exactly how she died and how Carly failed in her efforts to help Nelle.

Well, GH viewers will also remember that Nelle actually did have a friend at one point, and it’s someone who could soon be coming back to Port Charles.

While in Pentonville, Nelle befriended Ryan Chamberlain (Jon Lindstrom), and the two became just about as close as two psychopath killers could be. Ryan always seemed intrigued by Nelle, and vice versa, and it’s likely that Ryan missed his friend after she was gone.

Of course, Ryan is currently in bad shape, as he’s fallen victim to “locked in” syndrome where he’s basically catatonic and can’t move or respond to anyone.

However, GH viewers will remember that Ryan also smirked ever so slightly after his final visit with Ava Jerome Cassadine (Maura West) before he was transferred to a minimum-security facility.

Ryan’s smirk could indicate that he’s either 100% faking his syndrome, or that he’s on the slow mend and will get better down the line.

Either way, we’d say that there’s a good chance that at some point, Ryan will bust out of the minimum-security prison and will head straight into Port Charles where he’ll have some scores to settle.

Surely, Ryan will want to go cause havoc for Ava and Nikolas Cassadine (Marcus Coloma), but there’s also good chance that he’ll want to avenge his friend Nelle’s death, too.

Ryan may feel robbed of his buddy, and it will give him a good excuse to kill again, so Carly and Jax could find themselves in Ryan’s crosshairs.

We’ll see what happens here, but we’d say there’s a good chance that Ryan may seek out the people he thinks are responsible for Nelle’s demise. Do you think that Ryan will ultimately target Carly and Jax once he recovers and escapes from prison?

Stay tuned to the ABC soap and we’ll keep you up to speed on the latest General Hospital spoilers and news.