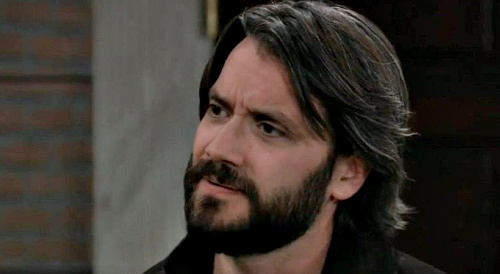 General Hospital (GH) spoilers tease that Sam McCall (Kelly Monaco) and Dante Falconeri (Dominic Zamprogna) have been growing closer, so fans have been wondering if this friendship might turn into more. Although that could happen down the road, a crisis will hit during May sweeps that pulls Dante and Sam apart.

We’re about to see some serious friction between them – and Jason Morgan (Steve Burton) will be at the center of Sam’s issues with Dante. GH viewers know Sam still had a lot of love left in her heart when she broke up with Jason. In fact, part of Sam may love Jason forever.

It was just a matter of keeping the kids safe and figuring out the best option for Sam’s family. However, Sam will certainly want to defend Jason when it counts.

Sam knows Jason isn’t guilty of killing Franco Baldwin (Roger Howarth), but she’ll find herself clashing with Dante when it comes to a case regarding her ex.

General Hospital spoilers suggest Dante may return to the police force right as Jason goes on the run with Britt Westbourne (Kelly Thiebaud). Dante has been mulling over returning to the PCPD anyway – and now they’re down a detective with Harrison Chase (Josh Swickard) stuck in a hospital bed for the time being.

Dante may agree to get back in the action and help out, so his first case back on the job might involve the manhunt for Jason. Sam may worry about Jason getting killed by one of Cyrus Renault’s (Jeff Kober) men if he gets caught and sent back to Pentonville.

There’s also the possibility that Jason will get injured or killed in the manhunt itself. Situations like this can be awfully dangerous, so Sam may think Dante should focus his attention elsewhere.

Perhaps Sam will argue that the PCPD should be trying to gather evidence to take down Peter August (Wes Ramsey) instead of chasing down Jason and Britt.

Dante definitely wants to take Peter down as well, but he can’t just ignore the fact that Jason will be a fugitive. If this is indeed Dante’s first case back on the job, he’ll want to give it his all.

Dante may think Sam needs to back off and let him do his job, but it sounds like Sam will be too riled up for that!