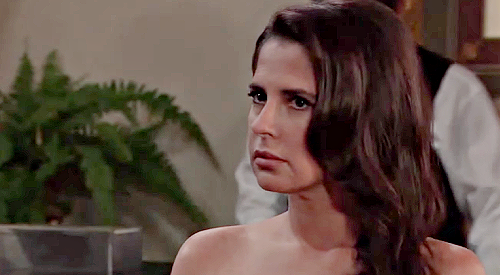 Ever since Cameron Mathison made his debut as a Drew Cain recast, the character has been focused on one thing: getting home to Scout Cain (Ella Ramacieri). There’s a reason why only Scout’s name is etched on the wall and not Sam’s.

GH even recreated a flashback involving Scout as a baby, so this bond between father and daughter is what the show’s concentrating on.

Drew certainly hasn’t been pining for Sam or the love they used to share. In fact, Sam acted like that love was never real at all during a recent conversation with Dante Falconeri (Dominic Zamprogna).

In the October 5 episode, Sam got honest about having a child with the man she believed was Jason Morgan (Steve Burton).

Sam talked about how she’d be there to help Drew figure out who he was now due to his link to Scout, but she didn’t offer much hope in the romantic department.

Sam was adamant that the Drew she thought she loved didn’t exist anymore and never really had.

In some ways, it felt like the show wanted us to know Sam had no romantic feelings whatsoever for Drew. Perhaps that was their way of telling fans to root for Sam and Dante as they continue to build this pairing.

Of course, this is a soap where couples often come back around eventually.

Sam could easily fall for Drew once she gets to know the real him, so we can’t rule out the idea of Sam and Mathison’s Drew getting together in time.

Nevertheless, it doesn’t seem to be the plan anytime soon since Sam was borderline harsh in her indifference toward Drew.

Sam cares about him as Scout’s father, but she made it clear that was it.

That could mean the show will pair Drew up with someone else once his trance is broken and he adjusts to life in Port Charles again.

Elizabeth Webber (Rebecca Herbst) might be a good option for Drew since GH seems to be dragging their feet on a Liz and Hamilton Finn (Michael Easton) pairing.

Maybe they don’t want Finn and Liz to get in too deep since Drew would make a good love interest alternative for Liz. It could be a reason for all the Liz and Finn stalling, but we’ll just have to wait and see!

Whatever the case, Drew will have to find a path forward with someone – and it may not be Sam if you go by her total lack of romantic interest right now.

CDL’s where you want to be for the hottest General Hospital spoilers, news and updates, so check back often.