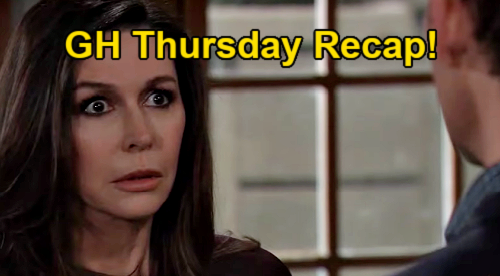 General Hospital (GH) spoilers recap for Thursday, February 4, reveal that Dante Falconeri (Dominick Zamprogna) wanted to leave the hospital, and he was dressing himself when Sam McCall (Kelly Monaco) walked in his room.

Later, Franco wondered why Dante had saved his life, and Dante brushed off the question, saying he didn’t know and that it was just something he had to do.

Finn expressed unease with the whole thing, but he felt that he needed to know the truth. Finn and Anna went back and forth about whether Finn would tell Chase about the results once he had them.

Carly walked off, and Scott needled Jason about potentially killing Franco. Just then, Jackie Templeton (Kim Delaney) walked up and whisked Scott away.

As they had drinks, Jackie said she wanted to get together with Bobbie Jones (Jacklyn Zeman) and others, and Scott let it slip that Bobbie had been fired by Cyrus Renault (Jeff Kober) and that she was on a private nursing job.

Across the restaurant, Sam and Dante arrived for something to eat, and they briefly talked to Jason. Jason learned that Peter August (Wes Ramsey) had fired Dante. Dante said that he got the idea that it was all because he didn’t like Peter being with Maxie Jones (Kirsten Storms).

Carly said they had to make sure that Nina doesn’t push this any further, since she didn’t need more scrutiny about Nelle’s death.

Jax mentioned Carly’s hostage situation with Florence Grey (Annie Abbott), and Carly played dumb. Jax said that Carly should get ahead of the Nelle situation in the event that Nina pushed things, and in the meantime, he’d try to work things out with Nina.

At the cemetery, Nina found Maxie at Nathan West’s (Ryan Paevey) gravesite, and soon Britt Westbourne (Kelly Thiebaud) showed up. The women talked about various things, including how Nelle was Nina’s daughter, and how Maxie was upset over virtually no one liking her engagement to Peter.

Nina then said that she had another family member – Wiley Quartermaine Corinthos (Erik and Theo Olson) – and that she wasn’t going to miss her chance to know her grandson.

At the gym, Chase and Gregory Chase (Gregory Harrison) sparred and Chase wondered if there was still hope for Gregory and Jackie. Chase thought that perhaps Gregory could try to salvage things, and soon Finn showed up. Chase tried to get Finn to help him encourage Gregory to work things out with Jackie.

After a lot of bonding and talk about father/son and brother/brother relationships, Chase got a call and had to go back to work. Chase took a big swig from a water bottle and threw the bottle in the recycling bin. After Chase and Gregory left, Finn retrieved the water bottle from the bin and put it in his bag.

At Anna’s house, Valentin Cassadine (James Patrick Stuart) came by for an update about Dante. Anna shared that Dante had been under the care of Dr. Warren Kirk (Jamison Jones), who was now dead and who also treated Liesl Obrecht (Kathleen Gati) and Franco.

Anna shared that Obrecht’s whereabouts are unknown, and that Dante saved Franco’s life. Anna blurted out that Peter had to be the common thread in all this somehow.

Anna then said that Franco was hearing Peter’s voice in his head, and that it was due to the Drew Cain (Billy Miller) memories that Franco had.

Just then, Jackie called Valentin saying she had a potential lead on Florence, but Valentin hung up on her. Valentin and Anna realized that the memories that Franco received of Drew’s were from Drew’s life before he came to Port Charles.

“That means that Drew knew Peter years ago,” Valentin said. “If that’s true, then why hasn’t Peter ever said anything!” Anna yelled.

That was a great episode of General Hospital, and you won’t want to miss tomorrow’s episode. Stick with the ABC soap and be sure to read CDL daily for the latest General Hospital spoilers, updates, and news.