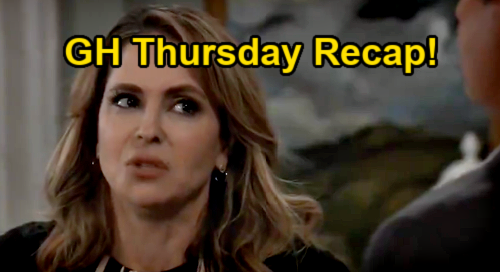 It wasn’t long before Franco admitted that he thought Jason could take care of things if his tumor caused changed in his behavior.

Elizabeth reeled, realizing that Franco had asked Jason to kill him. Elizabeth said that this broke her heart and that this should have been their choice, not Franco’s.

“You’re still here and I would like to spend every single moment I can with you,” Elizabeth said. “Don’t rob me of that!”

Franco told Elizabeth that he had gone to tell Jason that the tumor might not even be a problem, but Elizabeth said she was going to put an end to this, and she left. Later, Franco heard Peter August’s (Wes Ramsey) voice saying, “Please meet Drew Cain.”

At Kelly’s, Maxie Jones (Kirsten Storms) and Peter met Dante Falconeri (Dominic Zamprogna) for coffee and to tell him that they wanted to name their daughter after Lulu Spencer (Emme Rylan). Dante was touched.

Peter then took off to run an errand, and Maxie and Dante had a nice talk about Rocco Falconeri (O’Neill Monahan) and about Dante’s feelings for Peter. Dante vowed always to be there for Maxie.

At GH, Jason and Britt Westbourne (Kelly Thiebaud) continued their conversation about Peter. Jason ran down all the things that Peter had done over the years, rehashing history.

Jason insisted that Maxie was going to be the one who pays the ultimate price for Peter’s actions. Soon, there was a knock on the door, and it was Peter. Jason took off after a brief stare down with Peter.

Peter then asked Britt for a favor for his work at The Invader – he wanted Britt to log onto the hospital system and walk away, leaving him with the computer. Britt didn’t know about this, but Peter said that it could secure his position as a publisher.

Britt agreed, and she logged on and left. Peter promptly downloaded some files.

Suddenly, Britt came back and said that she changed her mind, but Peter had already gotten the information he needed downloaded onto a flash drive. Peter said he understood and took off.

Britt looked at the computer and discovered that Peter was looking at Franco’s hospital files. “What does he want with Franco’s medical record?” Britt wondered aloud.

Finn got a call from Alexis Davis (Nancy Lee Grahn) saying she needed help, and Finn rushed off.

Kevin Collins (Jon Lindstrom) walked up and sat down with Anna. After Anna expressed her concern about Dante to Kevin, she learned from Kevin that Dr. Warren Kirk’s (Jamison Jones) records were available to Kevin.

Kevin got someone to email Dr. Kirk’s patient files to him, and he pulled up Dante’s file, which was heavily redacted.

Anna thought that probably meant that something unorthodox was going on with Dante’s treatment by the WSB. Anna snooped in the files a little bit and discovered that another patient of Dr. Kirk’s was Liesl Obrecht (Kathleen Gati).

At Alexis’ house, Finn arrived, and the topic of Tracy Quartermaine (Jane Elliot) came up. Alexis said that Tracy’s version of events on the night of her DUI didn’t make sense, and then Alexis realized that Tracy must know that she slept with Ned Quartermaine (Wally Kurth).

Alexis and Finn took off for the Quartermaine mansion.

At the Q mansion, Olivia Quartermaine (Lisa LoCicero) lamented about how Ned didn’t come home one evening, and she demanded to know what happened between him and Alexis. Tracy tried to intervene, but Ned said that this ends now, and he admitted that he and Alexis slept together.

Ned tried to explain what happened, and he mentioned that he was drinking, which prompted Sam McCall (Kelly Monaco) to chime in that Ned was drinking with Alexis, the alcoholic.

Ned said that he found out after the fact that Alexis had been drinking. Olivia was understandably upset.

Just then, Alexis barged in with Finn saying that Tracy had set her up. Sam said that she believed Alexis, and Ned bellowed, “What did you do, Mother?”

Sam explained how Tracy had framed Alexis, and Tracy tried to deny it, but then she admitted the whole thing. Sam apologized to Alexis for doubting her.

Sam wanted Alexis to leave with her, but Alexis said that she needed to talk with Olivia. Olivia agreed, and everyone left them in the living room together.

Tracy tried to slink away through the foyer, but Ned told his mother that she wasn’t going anywhere.

Finally, at the gym, Elizabeth found Jason punching the bag. Jason wondered what was wrong. “It’s you,” Elizabeth said angrily.

General Hospital is really heating up, so stay tuned to the ABC soap! Remember, CDL is your go-to source for all the latest General Hospital spoilers, updates, and news. We’ve got you covered!