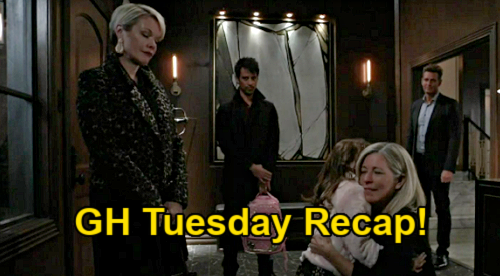 Carly Corinthos (Laura Wright) hugged Avery, who said that her daddy was with Kiki Jerome (Hayley Erin) and her grandpa now.

Jax headed to the kitchen to check in on Josslyn Jacks (Eden McCoy), who was feeling numb about Sonny Corinthos’ (Maurice Benard) death. Eventually, Josslyn went to get Avery to take her upstairs, and in the living room, Ava asked Carly about Avery’s special necklace.

Carly said that the necklace wasn’t back from the jeweler’s yet.

Ava then told Carly that since Sonny was gone, she was Avery’s custodial parent, and that Avery would come to Wyndemere to live. Carly was upset, and Ava pointed out that Avery would be less of a target at Wyndemere.

Back in the kitchen, Jax asked Trina Robinson (Sydney Mikayla) about how Marcus Taggert (Asante Jones) was doing.

Josslyn interjected that Trina was still upset that Taggert lied to her. Jax gently urged Trina to take her second chance to be a part of Taggert’s life. Trina seemed to take Jax’s words to heart.

In a moment alone with Jax, Josslyn said that she had decided not to go to Australia with him, and that she’s old enough to make her own choices. Jax agreed, but he still worried about her safety.

Back in the living room, Carly and Nikolas had a moment alone, and they argued about Ava’s desire to have Avery live at Wyndemere, while in the kitchen Ava checked in on Trina. Ava thought that Trina must be happy about Taggert being alive, but Trina expressed her anger over her father keeping her in the dark.

Back in the living room, Carly lamented to Jax about Ava taking custody of Avery.

And in the kitchen, Josslyn talked wistfully about Sonny to Trina, saying that she loved Sonny and that she missed him already. When it was time for Ava and Nikolas to leave, Avery went with them, making Carly upset.

Later, Carly lamented to Jax that losing Avery is the final proof that Sonny’s gone, and Jax comforted her.

Outside the Corinthos house, Avery told Ava that she still wanted her special necklace back. Ava explained that she could get Avery another necklace, but Avery said that she wanted the necklace that her daddy liked. Ava said that she’d get the necklace from Carly soon.

At the hospital, Curtis Ashford (Donnell Turner) and Portia Robinson (Brooke Kerr) were talking when they heard yelling and tussling coming from around the corner, which was TJ Ashford (Tajh Bellow) trying to get Brando Corbin (Johnny Wactor) to fight him.

Curtis promptly broke up the fight and took TJ to an exam room.

TJ was peeved with both Brando and Jordan, and Curtis wouldn’t justify what Jordan did, although he did say that Jordan was terrified for TJ at the time.

Back out in the hospital corridor, Molly found Portia tending to Brando’s cut lip. Molly learned what happened, and soon TJ and Curtis came out of the exam room together.

Molly and TJ went back into the room to talk, and Molly explained that Brando wanted to come clean in the beginning, but that she urged him not to do so. That seemed to calm TJ down a little.

Molly and TJ agreed that they didn’t want to repeat their parents’ mistakes, and that they needed to do better. Over at Crimson, Maxie Jones (Kirsten Storms) and Sasha Gilmore (Sofia Mattsson) went to see Nina Reeves (Cynthia Watros) to pitch the idea for Sasha’s tell-all cover story of her road to recovery.

Nina didn’t think it was a good idea for Sasha, nor for Crimson.

Sasha tried to persuade Nina to help her tell her story, and that it was the right thing to do, but Nina didn’t want help Sasha continue to suffer. “You’ll have to take this story elsewhere,” Nina said.

Nina said that she thought a lot of Sasha, and that despite the fake daughter ruse, she had enjoyed believing she was Sasha’s mother.

Nina mentioned that she got to experience motherhood with Sasha, probably for the only time in her life. Maxie and Sasha wondered if that meant that Nina had given up the search for her daughter, and Nina said that she decided to find happiness where she is right now.

Out somewhere in the ice and snow, some guy named Eddie gave Sonny his jacket and said he was taking Sonny to the ER. Sonny didn’t remember his name, and once the men got in the car, Sonny noticed Eddie’s St. Christopher medal on the rearview mirror.

That seemed to strike a chord with Sonny, but he said that he couldn’t remember anything before he woke up in the snow.

Soon, a trooper pulled Eddie over for speeding, and the trooper was all skeptical about Sonny’s story that he didn’t know who he was or how he wound up with a gash on his head.

Sonny managed to talk to the trooper and get him to believe his story that he had no wallet and didn’t know his name.

The trooper, having been charmed by Sonny, decided to escort Eddie and Sonny to the ER. On the trip to the ER, Eddie wondered how Sonny got the cop to eat out of his hands. “Call it gut instinct,” Sonny said.

That was another terrific episode of General Hospital, and more action is heating up for tomorrow, so stay tuned! Stick with the ABC soap and we’ll keep you current on the latest General Hospital spoilers and news. Here at CDL, we’ve got you covered!