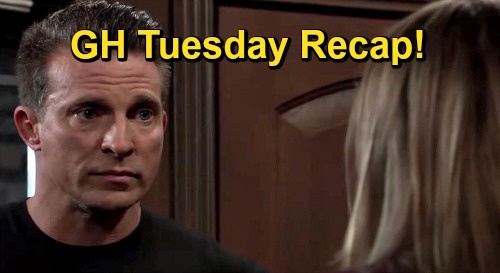 Jax wanted to know how Carly “handled” the situation with Cyrus Renault (Jeff Kober), but Carly wouldn’t spill what she had done. Jax and Carly kept arguing, and soon Nina interjected something, and Carly blasted Nina.

Nina took off for a meeting at the Metro Court, and Carly felt horrible for raising her voice. Jax and Carly discussed how Nina didn’t know that Nelle Benson Jerome (Chloe Lanier) was her daughter, then the conversation circled back to what Carly did to get a handle on the escalating tension with Cyrus.

Carly refused to talk about it, and she left upset with Jax.

Laura tried her best to get Jason to give up Florence’s location, but Jason stayed mum and wouldn’t confirm or deny anything. Laura assumed that Carly told Jason about Florence, and that Jason initiated the kidnapping. Laura left angry.

At the Metro Court, Peter August (Wes Ramsey) and Maxie Jones (Kirsten Storms) were talking wedding plans when Robert Scorpio (Tristan Rogers) entered. Robert seemed to be at least willing to wish Peter and Maxie the best on their wedding.

Anna told Valentin that she was getting the runaround from the WSB about Dante Falconeri’s (Dominick Zamprogna) release. Anna saw Robert across the room and thought maybe he could help.

Nina walked in the restaurant next and spoke to Valentin. Through their conversation, Valentin learned that Jax wanted Nina to give up her search for her daughter. Valentin blustered that Jax just wanted Nina all to himself. Nina looked exasperated.

Elsewhere in the Metro Court, Laura found Martin, who was bristly toward her due to Florence’s kidnapping. Laura said that she had no proof that Jason was responsible for the kidnapping, but Martin was sure that Jason had his mother.

Martin indicated that he was willing to do whatever was necessary to find his mother and keep her safe.

At the hospital, Elizabeth Baldwin (Rebecca Herbst) bumped into Dante, who was on his way to a meeting supposedly called by Kevin. Elizabeth thanked Dante for quickly calling the EMTs after The Floating Rib explosion and for helping to save Franco Baldwin (Roger Howarth) and Cameron Webber (William Lipton).

Dante then headed to the lab to see Kevin, but he found Liesl Obrecht (Kathleen Gati) instead. Liesl told Dante that because of him, she had been exonerated, and that she was taking over Dr. Kirk’s role as his handler.

As they continued to talk, Dante mentioned that Peter was engaged to Maxie and that they were expecting a baby. Liesl was horrified. Dante left the lab, while Liesl stayed behind.

Elsewhere in the hospital, Anna went looking for Kevin and she asked Elizabeth where he was. Elizabeth and Anna talked a bit, and Elizabeth ended up sharing that Franco had gone to Geneva to see a Dr. Kirk.

Elizabeth also told Anna that she had just seen Dante on his way to visit Kevin in the lab. That intrigued Anna. Back in the lab, Liesl left and went to the elevators, where Anna found her. Since Liesl was in disguise and in a mask, Anna didn’t realize who she was talking to as she asked Liesl if she’d seen Dante.

Back at the Metro Court, Elizabeth arrived in advance of a dinner date with Franco, and she saw Maxie and Peter. Elizabeth shared that she and Franco would be at the wedding, and she gushed about how Franco owes his life to Peter. Peter looked unnerved.

At Sam McCall’s (Kelly Monaco) place, Franco arrived to see Jason, but Sam said that Jason didn’t live there anymore. Franco stepped into the hallway to leave, and he had another episode where he heard Peter’s voice saying, “Sorry, I have no choice.” Franco tried to pass it off as a migraine, but Sam made him come inside.

Soon, Jason arrived and found Franco at Sam’s place. Franco told Jason in private that he wanted to give him the heads up that his troubles might be due to the memory transfer ordeal he underwent – not due to him possibly turning back into a serial killer.

Jason was skeptical about the whole thing, and Franco ultimately left but again heard Peter’s voice in his head.

There’s definitely a lot going on right now on General Hospital, so stay tuned! We’ll give you updates as GH news comes in. Don’t forget to check CDL regularly for the latest General Hospital spoilers, updates, and news.