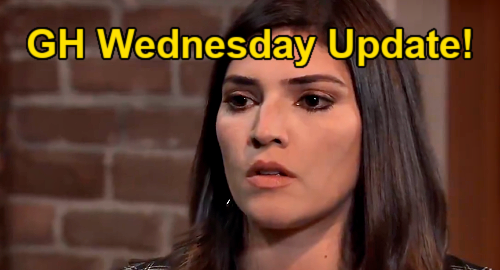 On Tuesday’s episode, August 3, Trina Robinson (Sydney Makayla) ran off after hearing a bombshell not meant for her ears. She turned to Spencer Cassadine (Nicholas Alexander Chavez), who encouraged Trina to talk about it with her mom.

Curtis told Jordan Ashford (Briana Nicole Henry) that their marriage was not getting another chance.

Plus, Austin Gatlin-Holt (Roger Howarth) helped Harrison Chase (Josh Swickard) search for his wife. Chase discovered Willow Tait (Katelyn MacMullen) and Michael Corinthos (Chad Duell) in bed together. However, the secret lovers have no idea that they have been found out.

GH spoilers for Wednesday reveal that Portia desperately tried to call her daughter. She had a hospital floor full of patients, so Portia couldn’t leave to chase after Trina Robinson (Sydney Makayla).

Spencer was able to get through to Trina. In the preview clip for Wednesday, Portia and Trina have a heart-to-heart, which gets emotional for both the mother and daughter.

Curtis has been having trouble with Stella, who keeps trying to fix his marriage. Once Curtis wouldn’t listen to her anymore, Stella tried getting Portia to walk away from Curtis.

Then, she would encourage Jordan Ashford (Briana Nicole Henry) to save her marriage. Well, Jordan has done all that and asked for another chance, but Curtis said no.

Stella will run to Curtis and confess to interfering once again. She feels terrible about what Trina overheard.

Curtis will be frustrated that Stella wouldn’t stop interfering as he asked multiple times. However, he will also try to understand her point of view.

General Hospital spoilers for Wednesday reveal that Harmony and Alexis Davis (Nancy Lee Grahn) will have a heated conversation. Alexis accuses Willow’s mother of having ulterior motives. How will Harmony respond to the allegations?

Plus, Chase announces that he has something to say to Michael and Willow. How will they respond to what Chase has to say to them?

“There’s something I wanna say to you… and Michael.” #GH pic.twitter.com/cZaKH7saa4