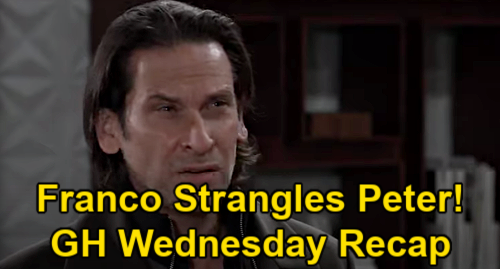 General Hospital (GH) spoilers recap for Wednesday, January 27, reveal that Peter August (Wes Ramsey) was in his office at The Invader telling someone to pull the trigger, when Dante Falconeri (Dominick Zamprogna) walked in the office. Peter told Dante that a big story was going down today that could pose a risk to him and the staff.

Dante looked at Peter’s computer screen and asked, “Is this true?” Peter didn’t answer, instead telling Dante that he was about to earn his salary. Dante agreed to speak to the staff, and he took off.

Meanwhile, at the Metro Court, Jackie Templeton (Kim Delaney) prepared for her interview with Sasha Gilmore (Sofia Mattsson). Harrison Chase (Josh Swickard) was there to support Sasha, as was Michael Corinthos (Chad Duell) and Willow Corinthos (Katelyn MacMullen). Jackie was worried that Sasha wasn’t there yet.

Over at the bar, Jason Morgan (Steve Burton) told Carly Corinthos (Laura Wright) that they needed to declare Sonny Corinthos (Maurice Benard) legally dead and have a funeral, due to pressure from the five families.

Jason said that he needed to make it clear that he was in charge. Carly agreed if it meant that it kept the family safe.

Michael walked up and shared with Jason and Carly that his marriage to Willow was officially over. Just then, a news report came through on Michael’s, Carly’s, and Jason’s phones.

“Oh, my God,” Carly said. Across the room, Chase introduced Willow to Jackie, and just then Jackie saw the news on her phone. “It’s shaping up to be a busy news day,” Jackie mused.

At the gym, Maxie Jones (Kirsten Storms) and Britt Westbourne (Kelly Thiebaud) did prenatal yoga, with Britt standing in for Peter as Maxie’s coach. Maxie gushed about the big, beautiful life she had ahead of her, and just then a news report came through on both of their phones. Britt looked upset.

At Alexis Davis’ (Nancy Lee Grahn) house, Sam McCall (Kelly Monaco) showed up to find Alexis drinking to celebrate getting her driver’s license back. Sam and Alexis each got a news alert on their phones and reacted with surprise.

Ava and Avery went off to the appointment, while Nikolas found Elizabeth Baldwin (Rebecca Herbst). As Elizabeth and Nikolas were talking, they each got a news alert on their phone. “Oh no,” Elizabeth said.

In some alley, Franco Baldwin (Roger Howarth) met with Liesl Obrecht (Kathleen Gati), and Franco wanted to accelerate the timeline on his treatment. Franco wondered why Liesl was so interested in some random memory of Drew Cain’s (Billy Miller). “Is Peter really that important?” Franco asked.

Just then, Franco and Liesl got a news alert on their phones. Franco looked and it was a story in The Invader about Franco and his tumor coming back. Franco fumed, and Liesl wondered if he had told anyone outside the family about his tumor. Franco said that he only told Jason.

Franco wondered why Peter would do this to him. “I even told Peter that I had his voice in my head,” Franco said. “Peter knows you’re having more Drew memories?” Liesl asked. Franco rushed off to go get some answers, and Liesl called someone to say that there’s been a development and that they need to act.

Back at the hospital, Nikolas freaked out on Elizabeth, ranting that he wanted to move her and the boys to Spoon Island. Elizabeth fired back that Franco was dying and that she needed his support. Nikolas and Elizabeth hugged, just as Ava and Avery walked up. Avery was wearing her half-heart necklace.

Nikolas spoke with Ava, wondering if she had seen the news about Franco. Ava had, and she and Avery took off. Nikolas asked Elizabeth how he could help. Elizabeth said that Franco had done something to exacerbate the situation, and that it involved Jason.

Later, Elizabeth was alone at the nurses’ station when Sam and Alexis rushed in upset over The Invader article. Alexis was all boisterous, demanding to know what Elizabeth’s plan was, but Elizabeth said she didn’t have to defend herself. Elizabeth asked Sam to back her, but Sam said that she couldn’t.

Back at the Metro Court, Carly, Jason, and Michael talked about Franco’s tumor coming back. Jason said that he would make sure that Franco didn’t hurt anyone they cared about.

Michael vowed to up security at the Q mansion, then he walked off. Carly and Jason talked some more, with Jason warning Carly that kidnapping Florence Grey (Annie Abbott) and wrangling necklaces wouldn’t help her grieve.

Over near where Sasha’s interview was being set up, Lucy Coe (Lynn Herring) walked in, and Jackie demanded to know where Sasha was. Meanwhile, Michael pulled Willow away from Chase and told her that she couldn’t move out of the Q mansion right now.

At Crimson, Jasper “Jax” Jacks (Ingo Rademacher), Nina Reeves (Cynthia Watros), and Sasha talked. Sasha told Nina that she was going on GMA3 for an interview, and Nina took Sasha inside her office to talk.

Outside the office, Valentin Cassadine (James Patrick Stuart) walked in and bickered with Jax, saying that he wanted to see Nina.

Back in the office, Sasha told Nina that she wanted to do the interview to take back control and feel empowered again. Jax poked his head in the office and said that Valentin was loitering outside, and that Lucy called looking for Sasha. Sasha took off for her interview, and Valentin entered the office.

Valentin asked Jax and Nina whether there was any word on Cyrus Renault’s (Jeff Kober) mom. Jax played innocent, and Valentin mused that Carly was probably the one who took Florence, and now Jason’s backing her up. “Jax, reach out to your ex and convince her to reverse course,” Valentin said.

Back at the Metro Court, Sasha walked in ready for her interview, while Carly told Jason privately that Nina can never see Avery’s necklace. Just then Ava and Avery walked off the elevators.

By this time, Sasha was now dressed and glammed up for the interview. Lucy put a necklace on Sasha while Sasha was preoccupied, and it was Avery’s necklace. Sasha had no idea that she was wearing that particular necklace. The interview started, and Avery wanted to watch the interview.

Michael noted to Carly, who was standing nearby, that Avery wanted to see the interview because Sasha was wearing her good luck charm. Carly looked alarmed.

Back at The Invader, Britt arrived to see Peter, furious about the story about Franco. “You used me,” Britt fumed. “Did you or did you not swipe Franco’s medical records from the GH server?” Britt demanded. Just then, Franco appeared in the doorway. “That’s a good question,” Franco said angrily.

Peter said he would call security, and Franco threw the phone out of Peter’s hand. Peter asked who he was speaking to – the old Franco, or Franco 2.0. Franco said that he was a husband and a stepfather to three boys. “Why would you put my family in jeopardy?” Franco asked.

Peter said that Franco admitted to hearing voices. Franco said that was because of what Shiloh Archer (Coby Ryan McLaughlin) did. Franco then tried to strangle Peter, roughing him up, when Dante rushed in and tore Franco off of Peter. With Franco down on the ground, Dante told Peter to call the police.

But then Britt intervened, saying that if Peter called the police, he’d have a big problem with her. Dante got Franco up off the ground, and Franco said that this wasn’t over. Dante and Franco left, and Britt turned on Peter, saying that she was furious and that he manipulated her.

Then Peter turned on Britt, saying that he loved her but if she pushes this then it might threaten his family. “You don’t want to come between me and Maxie and my child,” Peter threatened. “Or what?” voice said. It was Jason at the door. Peter turned and looked ominously at Jason.

Back at the gym, Nikolas was punching the bag remembering his conversation with Elizabeth when Ava walked in. Nikolas asked if Ava had spoken to Franco, and Ava said no.

Nikolas and Ava mused that despite all of their issues, they had it pretty good. “Why not press our luck?” Nikolas said, getting down on one knee. “Marry me, Ava, for real.”

Back in the alley, Dante met Liesl and told her about the altercation over at The Invader with Peter and Franco. Liesl said that the article was a preemptive attempt on Peter’s part to implicate Franco.

Liesl clicked her pen, and she told Dante that Franco is the key to proving Peter’s guilt. “Franco must be protected at all costs – it’s up to you to do it,” Liesl said.

Back at the hospital, Franco walked up while Elizabeth was talking with Sam and Alexis. Franco said that The Invader story wasn’t the whole story. Alexis ranted about whether she needed to arm herself, and Elizabeth asked if Alexis was threatening Franco.

Alexis went into an exam room to cool down, while Franco told Sam and Elizabeth that he had made arrangements to make sure that he wouldn’t hurt anyone. In the exam room, Alexis eyeballed a syringe.

Back at Crimson, Nina and Jax pulled up Sasha’s live GMA3 interview on Nina’s computer. The interview started, and Nina immediately noticed the necklace that Sasha was wearing. “Oh my God, Jax, she’s wearing my daughter’s necklace!” Jax was rattled.

And at the Metro Court, Avery pointed to the monitor where Sasha was talking and wearing the necklace. Carly looked horrified.

General Hospital is really heating up, so be sure to keep tuning in so you don’t miss any of the action! Stick with CDL for all the latest General Hospital spoilers, daily episode recaps, and news.