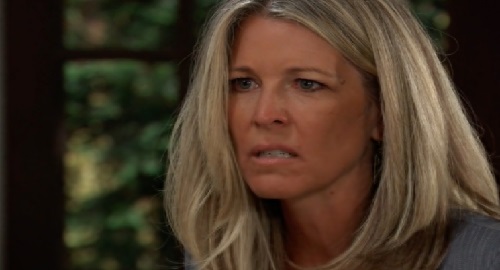 General Hospital (GH) spoilers recap for Wednesday, September 29, reveals that Carly Corinthos (Laura Wright) vowed to burn Nina Reeves’ (Cynthia Watros) life to the ground and spit on the ashes. Jason Morgan (Steve Burton) was forced to break up the fight, so let’s talk about how it all went down.

At GH, Sonny Corinthos (Maurice Benard) expressed his gratitude to Jason for caring about his bipolar disorder. He talked about being there to see Dr. Sullivan and confirm his dosage, but he didn’t need Jason to wait around.

Jason mentioned needing to call Diane Miller (Carolyn Hennesy) about the paperwork to have Sonny declared alive, but Sonny thought the more pressing issue was filling Carly in on the Nina situation.

Epiphany Johnson (Sonya Eddy) was delighted to see Sonny and admitted she’d already heard the news of his survival. She took Sonny off to get his vitals before explaining how Jason and Britt Westbourne (Kelly Thiebaud) grew closer.

Jason had an uncomfortable conversation with Britt, who once again made it clear she didn’t need Jason’s help with missing Liesl Obrecht (Kathleen Gati) or anything else. Later, Sonny talked to Jason about giving up Britt for Carly. He acknowledged the sacrifice and suggested there might still be hope for Jason’s previous romance.

Outside the pub, Trina Robinson (Sydney Mikayla) discussed the trap she intended to set with Josslyn Jacks (Eden McCoy) and Cameron Webber’s (William Lipton) help. Cameron wavered briefly, but he decided he was in and headed to Wyndemere with a phony story.

After Cameron asked for Spencer Cassadine’s (Nicholas Chavez) notes from a class they shared, Spencer reminded Cam that he didn’t take any since he was merely auditing. Esme Prince (Avery Kristen Pohl) was present as Cameron wondered if Spencer would have another rager while his father was away.

That led to confusion, so Cameron lied that Trina booked two tickets to Bora Bora. The trip was supposedly meant to celebrate Nikolas Cassadine (Nicholas Chavez) and Ava Jerome (Maura West) not getting a divorce after all.

While Cameron was in the bathroom, Esme asked when Spencer would learn that she’s always right. She felt like she could handle the situation, so she pushed Spencer to trust her and took off.

Once Cameron returned, Spencer fished to find out the real reason for this visit. Cameron acted like he wanted to move past the recent tension and check on Spencer. He mentioned the rest of the gang’s fears about Esme having a hold on Spencer, but Spencer insisted Esme loved him.

Talk turned to Spencer’s relationship with his father, which he wasn’t optimistic about. Cameron tried to compare his own experience with Franco Baldwin (Roger Howarth), but Spencer didn’t think it was the same since he wasn’t Cam. When Spencer alluded to not deserving a father-son bond after everything he’s done, Cameron was curious about what he meant.

Back with Josslyn, she called Jason and admitted she hadn’t been able to reach Carly. Josslyn mentioned that Carly found out about Nina and was on the warpath, so Jason got in touch with Damian Spinelli (Bradford Anderson) to track Carly’s phone.

At the Quartermaine mansion, Carly raged over Nina hiding Sonny for months and wondered why she shouldn’t kill Nina for it. Nina thought Carly should just be glad she got Sonny back since she’d never see her own daughter again.

Carly wanted Nina to stop acting like Nelle Benson (Chloe Lanier) was a martyr instead of a murderer. She declared that the world was better off without Nelle and Wiley Quartermaine-Corinthos (Caleb and Kyler Ends) was better off, too.

Nina was appalled that Carly could even say something like that to her. She was willing to apologize to Sonny as well his kids, friends, family members, even his seventh-grade math teacher – just not Carly!

Nina repeatedly acted like Carly should just be grateful Sonny had returned, but she wondered if Sonny would stay happy now that he was back in his old life. At one point, Nina mentioned how Jasper “Jax” Jacks (Ingo Rademacher) knew and gave her a chance to confess before all the fire drama went down.

Nina talked about how “Mike” was content in Nixon Falls, but Carly didn’t like her using that name for him. When Nina brought up Morgan Corinthos’ (Bryan Craig) mob-related death, Carly felt like Nina was throwing it in her face. Jason entered right as Carly lunged at Nina and turned this into a physical confrontation.

After Jason broke up the fight, Carly made it clear that Nina was never going to see Wiley again. Once Nina was gone, Jason tried to calm Carly down. As Carly vowed to destroy Nina, she said she would burn her life to the ground and spit on the ashes!

Back with Esme, she made her way to GH with Josslyn following her. Esme found Sonny since she had something important to tell him – and Josslyn stood nearby looking baffled over Esme’s latest move.

At Kelly’s, Nikolas Cassadine (Adam Huss) told Ava that Sonny was alive and felt it changed everything since Sonny could protect Avery Corinthos (Ava and Grace Scarola) with his resources. Ava admitted she already knew about Sonny’s survival and insisted this changed nothing.

All Ava had to do was wrap up a few things before setting up her new base of operations in London. Nikolas saw the divorce papers waiting to be filed before Scott Baldwin (Kin Shriner) chimed in with some potential solutions – including dating other people or just taking the kids with them elsewhere.

Scott hated to see true love slip away, but his failed suggestions made Nikolas see that Ava leaving town was the only path forward. Nikolas offered his own resources to help find Liesl Obrecht (Kathleen Gati) if Scott needed them, so Ava thought that was a nice gesture.

Nikolas assured Ava that he’d do everything in his power to make it so they could be together again. As Ava prepared to leave Port Charles, Nikolas hoped she could do one thing and asked her to wait for him. Ava moved in close for a warm moment before heading out the door.