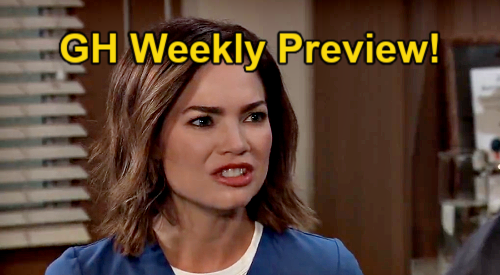 General Hospital spoilers preview for the week of December 13 reveal that Peter August (Wes Ramsey) could finally pay for his crimes with his life. The weekly preview shows that nearly everyone has a reason to want Peter dead. It appears that Peter survives the poisoning and is hospitalized. However, don’t expect him to survive long, according to Sonny Corinthos (Maurice Benard).

GH spoilers reveal that the preview begins with Sonny and Carly Corinthos (Laura Wright) receiving an update. Sonny looks serious while Carly clasps her hands together and begs for Peter to be dying.

So, it seems that poisoned Peter will be taken to the hospital while he still has a pulse. That doesn’t mean he will make it, although GH spoilers say he will not succumb to the poison.

Even if Peter survives, there is no way that all those people in Port Charles are going to let him continue his reign of terror. Even behind bars, Peter remains a threat.

Next, there is Drew Cain (Cameron Mathison), who pays a surprise visit to Curtis Ashford (Donnell Turner).

Curtis explains that Peter has been causing all kinds of chaos and turmoil in Port Charles. Drew listens to everything that Curtis is telling him and of course, Drew has his own horrid tales about Peter.

Liz, with a strained and tense voice, tells Finn that Peter murdered her husband, Franco Baldwin (Roger Howarth). Liz also explains to Finn that Peter is the reason why Jason Morgan (Steve Burton) is dead.

It almost sounds like Liz is trying to justify and convince Finn of something, so could she have a plan to make sure Peter never hurts anyone again?

The weekly preview shows Sonny and Carly having a conversation. Sonny makes his wife a promise, which is that Jason’s death will be avenged.

However, Sonny makes it clear that this isn’t just for Jason, but for everyone. Then we see someone clad in surgical attire taking hold of a deadly looking scalpel! So, it sounds like Peter’s days could be numbered and General Hospital could be setting up a murder mystery story.

With so many people that want Peter dead, which one will actually get the job done? More importantly, will Peter stay dead this time?

“He will be avenged.” #GH pic.twitter.com/29spXOskPN