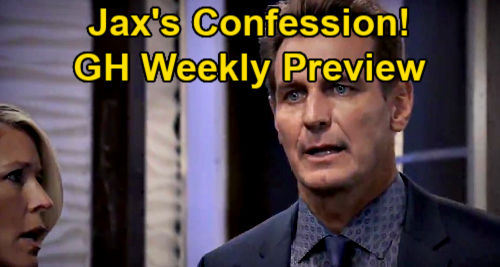 But first, it appears that there could be some drama in the love triangle that’s formed between Michael Corinthos (Chad Duell), Willow Corinthos (Katelyn MacMullen), and Harrison Chase (Josh Swickard).

As GH viewers know, Michael and Willow decided to sign their annulment papers, but that may not be the end of it.

Michael is shown getting some sort of message on his phone, and he rushes off to go take care of things. We’ll see what this is about, but since both he and Willow have very mixed feelings about signing those annulment papers, it could have something to do with that, or about Willow’s re-blossoming feelings for Chase.

Next, the preview shows other characters checking their phones and apparently seeing some big news.

Maxie Jones (Kirsten Storms) and Sam McCall (Kelly Monaco) are shown reading some news on their devices, and Franco Baldwin (Roger Howarth) is shown with Liesl Obrecht (Kathleen Gati) saying, “What the…?” as he sees something on his phone as well.

Other characters are shown reacting to something as well, including Curtis Ashford (Donnell Turner) and Carly Corinthos (Laura Wright), and Chase reacts to something shocking, too.

Elizabeth Baldwin (Rebecca Herbst) is shown as well with Nikolas Cassadine (Marcus Coloma), as presumably they see some breaking news on their phones. “Oh no,” Elizabeth says warily, while Nikolas asks Elizabeth if it’s true.

And this probably means that the big news is about Franco – probably about his tumor returning.

GH spoilers say that Peter will publish a big story during the week of January 25, and it’s looking like that story could be all about Franco and his tumor recurring.

Peter might have gone all out and speculated in the article about how Franco might become his killer persona again. That would certainly benefit Peter, since he wants to neutralize Franco and prevent Franco’s Drew memories from implicating him in crimes.

Peter could have decided to paint Franco as unstable once again to prevent his Drew memories from being taken seriously.

Of course, if all this is true, then that might spur Jason Morgan (Steve Burton) to want to kill Franco even more.

It’s going to be a real mess, and Peter’s probably going to have several people upset with him over this story, possibly even including Maxie. We’ll see how this plays out.

Finally, the weekly preview wraps up with Jasper “Jax” Jacks (Ingo Rademacher) apparently getting fed up and wanting to tell Nina the truth about Nelle Benson Jerome (Chloe Lanier) being her daughter.

It looks like the situation regarding Avery Corinthos’ (Ava and Grace Scarola) necklace might come to a head, as Carly will try to get the necklace back from the little girl this week.

But that effort may not go as planned, and Jax and Nina are shown in the preview at the Metro Court, where Jax becomes overwhelmed with guilt and blurts out to Nina that he can’t lie to her anymore.

Carly is standing right there, and we’d be surprised if she didn’t try to intervene in Jax’s big confession. After all, Carly could get implicated in Nelle’s death if Nina were to push things too far.

We’ll see if Jax actually gets his confession out, or if Carly stops him. But given that Valentin Cassadine (James Patrick Stuart) is also in the scene, Carly might have real trouble as she tries to cover for Jax.

Valentin will probably suspect that something’s going on, and he’s not one to let things go!

It certainly seems that we’re in for an exciting week, so stay tuned to the ABC soap! We”ll keep you informed on all the latest General Hospital spoilers and news going forward. Stick with CDL!

“I can’t lie to you anymore.” #GH pic.twitter.com/0cdKbjoG7Q