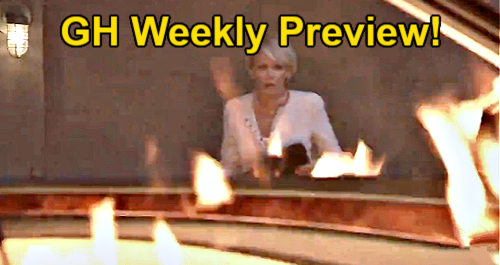 General Hospital spoilers reveal that the weekly preview for August 16 to 20 confirms Drew Cain’s (Cameron Mathison) return. In addition to that, someone sets a car on fire and it suggests that Spencer Cassadine (Nicholas Alexander Chavez) might not be the only stalker in Port Charles. Plus, Carly Corinthos (Laura Wright) takes a stand and makes a bold statement.

However, Carly feels that she is handling the situation the correct way. Jax will once again confront Carly about Josslyn, which causes her to make a bold statement.

Carly says that she and Jason Morgan (Steve Burton) need to show strength. Jax questions if Carly is strong enough to handle this and of course, she responds with a firm “yes.”

The weekly preview also teases that Ava Jerome Cassadine’s (Maura West) troubles might not be over. Last week, Nikolas Cassadine (Marcus Coloma) told Ava that the stalker was his own son.

However, Ava walks out to her car to find it completely engulfed in flames. Spencer has done a lot of things, but this seems to suggest there is an even bigger threat in Port Charles.

More Than One Stalker?

It is confirmed that Spencer’s party will be crashed by an unexpected and uninvited guest. The identity is still under wraps, but it suggests that Spencer might not be the only stalker in town.

As the narrator teases a big return, Sam McCall (Kelly Monaco) answers the phone. It is Drew Cain that is calling his former flame and mother of his child.

Drew was declared dead when his plane went missing, so he is the last person Sam expects to get a phone call from. Sam asks the caller to identify themselves and it is teased that she will be in complete disbelief.

Drew calls Sam because he’s in trouble and needs her help. The question is, what kind of trouble is he in, and can Sam get him the help that he needs before it’s too late?

“We have to show strength!” #GH pic.twitter.com/r9vwlr7yKh