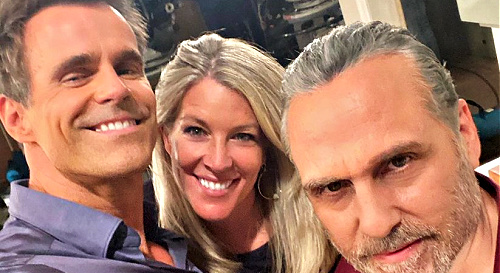 General Hospital (GH) spoilers tease that Drew Cain (Cameron Mathison), Sonny Corinthos (Maurice Benard) and Carly Corinthos (Laura Wright) are poised to become GH’s new main trio. What does that mean for Jason Morgan (Steve Burton)? It’s time to start thinking about what the future’s going to look like once Drew’s back in Port Charles.

Of course, we should acknowledge that there have been major social media rumblings about Steve Burton’s potential departure. Inside sources insist that Steve Burton has been forced out due to failure to comply with the vaccine mandate.

There’s no confirmation just yet, but the buzz is quite strong and is coming from people who have proven extremely reliable.

We’re talking about sources that have predicted things well in advance – like Franco Baldwin’s (Roger Howarth) death, Spencer Cassadine’s (Nicholas Chavez) return as a recast along with other big story shockers and casting shakeups.

With that in mind, it’s important to face reality and accept that Burton may genuinely be out as Jason Morgan. If the buzz is true, it’s going to leave a spot open that Drew could fill.

In fact, Cameron Mathison recently posted an Instagram photo that suggested Drew, Sonny and Carly are the trio of the future. They’re at least going to be spending some time together since Mathison has been shooting with Benard and Wright.

Drew walked away from the mob and chose a safer path back when he was living in PC. However, there’s the potential for Drew to be drawn back into that dangerous lifestyle.

It’d be easy for GH to argue that Drew’s conditioning revived something inside him and made him crave that sort of danger.

Even after Drew defeats that conditioning, it could affect his personality somewhat.

Drew also seems to remember his Navy SEAL days now, so that could be another factor. It’s been great seeing Drew in action mode, so the show may let him continue with his risky adventures back in Port Charles.

Drew might even take Jason’s place as Sonny’s enforcer down the road. He could at least become the go-to guy when Carly and Sonny need urgent help.

Sonny and Carly may soon have to rely on someone besides Jason if he’s indeed out of the picture – and all signs point to Steve Burton’s exit so far.

General Hospital spoilers say Drew is set to reunite with Sonny and Carly, so it’ll be interesting to see where things go from there.

CDL’s where you want to be for the hottest General Hospital spoilers, updates and news, so make us your top source.