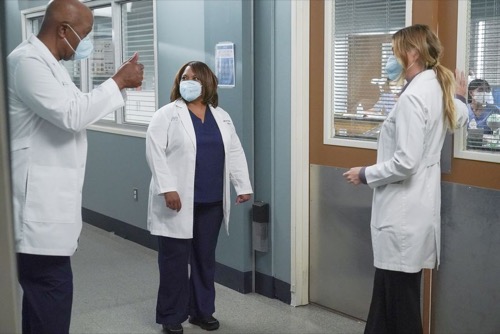 In tonight’s Grey’s Anatomy finale, People often asked Meredith what she learned from surviving covid. She tends to get annoyed with that question because it brought back to her worst moments like being separated from her children and hooked up to a vent. Meredith wants to move on. She was ready to go back to work and she didn’t want to spend time thinking about things she’s missed. Yet, everyone wants her to take it slow.

Bailey got her an office with a desk and Meredith was assigned the interns. She was put in charge of them after she returned to work. Meredith also wasn’t given any surgeries. She was still recovering and no one wanted to take a chance she could stand for such a grueling surgery or for hours on end.

Meredith was so disgruntled she didn’t even write a speech for Maggie’s wedding. Which was a good thing because the wedding didn’t go ahead. Maggie’s father and Winston’s grandmother objected to the wedding. They didn’t like how small it was or that it wasn’t in a church. They both wanted a large wedding with everyone invited and, in the meantime, Winston and Maggie could continue living together.

His grandmother said that. She didn’t object to them living together before marriage if it meant they could plan for a big wedding once covid is over and so the wedding didn’t go ahead. Maggie and Winton agreed to wait until covid is over. The wedding was canceled and they had a party in its place.

Another great reason for postponing the wedding is that not everyone could attend. Amelia couldn’t attend because she had a tricky case at the hospital and unbeknownst to everyone she was also struggling with sobriety. Amelia’s mind has been going to dark places since the start of the pandemic.

She hasn’t told anyone outside of the group and she hasn’t even mentioned it to her boyfriend. Link doesn’t know that Amelia is struggling. He thinks she’s on top of everything and that’s why he mentioned such a radical plan. Link wants to foster baby Luna. He wants to do it to help his best friend Jo. Jo wanted to adopt the baby and her application was denied because of her past.

Jo still wants to adopt the baby. She was willing to sell her shares in the hospital in order to afford a lawyer to help her gain custody and so she just needed someone to take Luna for now. Luna was a baby girl. There was a lot of interest in adopting her and Jo was afraid she’ll be adopted before she gets everything she needs to do the adopting herself. Jo, therefore, asked Link for help.

Amelia only got married the other time because she had a tumor that was secretly killing her. It was completely unfair to Owen and she regretted hurting him. Owen was now with Teddy. The two of them worked out their problems and they were back to sleeping together. They had to take a break for a while because Teddy tested positive for covid. She thankfully didn’t give it to her patients or to her family. She just needed to quarantine for a while and then she was back to her old self. She and Owen are back to sleeping together. They live together. They co-parent. They seem to have gotten closer because of covid. And while Teddy suffered no side-effect from covid, Meredith couldn’t say the same.

Meredith tried performing a minor procedure. She became weak on her feet and light-headed. Maggie had to step in to complete the procedure. Meredith hated feeling like that. She hated feeling like she couldn’t be her old self. Meredith also hated how other people treated her. They treated her with kid gloves and she still couldn’t perform surgery even months after the incident. She did however bond with Hayes.

He knows what it is like not to feel the holiday spirit and so the two shared a moment. Meredith later went home to celebrate Christmas with her kids. They were all enjoyed the holiday when Link planned to propose only Owen preempted him. Owen ended up proposing to Teddy.

Teddy said “yes”. She and Owen are getting married and Link couldn’t propose now and that’s a good thing because Amelia doesn’t want to get married. She’s thought about it. She talked about it in NA meetings and so the only one she wasn’t telling was Link. Link had bought three rings in preparation for proposing to her. He wanted everything to be so perfect. He didn’t know he was going to be faced with rejection. Months went by.

The vaccines came out and everyone at the hospital was vaccinated. There were even some of them that cried and they all revealed in the chance of just being able to touch each other. Jo eventually got the lawyer. The lawyer guaranteed her chance at adopting Luna and all she had to do was sell her shares in the hospital.

She sold it to Koracick of all people. Koracick now owns shares in the hospital and he loves having conversations with Bailey about what should improve at the hospital. Bailey couldn’t believe Jo did that. Then again Jo wasn’t the only doctor annoying her lately. Meredith was doing the same because she was advocated for a former covid patient to receive a double lung transplant and she was teaching the latest interns to be like her. To be defiant.

They all pushed for the double lung transplant until Bailey agreed to put the patient on the transplant list and so now she regrets putting Meredith in charge of teaching the interns. Another few months went by, vaccines became readily available for everyone and so eventually Maggie and Winston had their huge wedding.

Everyone was invited this time. Richard performed the ceremony and it was what both families wanted. Meredith and Teddy had to live early because their patient’s new lungs came in. They went to go perform surgery and Owen watched the kids while they were gone. Link roped the kids into helping him propose and he later proposed to Amelia at the wedding but she couldn’t say yes. She just refused to say anything at all. And Link got the picture.

Link took the rejection hard. He went to Jo’s new place and he crashed there. Jo bought Jackson’s old apartment. It was in a good building and in a good neighborhood. It also had room for Luna who Jo eventually adopted.