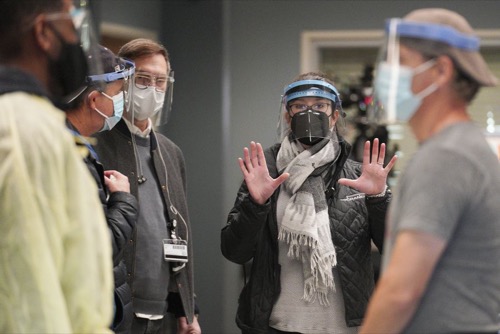 In tonight’s episode of Grey’s Anatomy, The death of George Floyd changed things. The country was already experiencing a global pandemic with Covid-19 and now they were dealing with a different change. One that affected every one of the doctors one way or another. Richard was still in charge seeing as Bailey had taken some much-needed time off and so Richard suggested the same for others. He was willing to give people time off to grieve on their own.

Richard as a black man decided to protest and so did Dr. Hayes. Hayes was the father of two mixed-race children. He knew this racial fight was going to fight soon and he wanted it to change. He took his kids to a protest. Things got violent once Neo-Nazis showed up as counter-protestors and Hayes had to visit the hospital with a giant gash on his head. He got in between a Nazi and his son.

His sons are still boys. Yet, that didn’t stop a literal Nazi from coming at one of them with a pipe and the police were no better. Richard himself returned to the hospital with people that injured in the protest. They at least had gotten beaten up by cops rather than Nazis and some were treated for being pepper-sprayed while one was being treated for being shot. She was shot with some object other than a gun.

The tip of the object/of the canister flew off as well and it was now inside the older woman. She was going to need surgery to remove it and so that’s why Richard brought her back to his hospital. The hospital was dealing with an influx of patients from the protest. There was even someone who had been shot with a rubber bullet and the bullet was still inside them.

She wasn’t going to rest easy until he arrived and so she constantly checked her phone for any updates or messages from him. Maggie was preoccupied as she started to treat people from the protest. She and all the other doctors had been called in to handle the influx. They were all working in the Emergency Room and Bailey met her first doubter. She met someone who didn’t believe Covid-19 was real.

The doubter was so sure it was fake that he told Bailey not to bother testing him from Covid. He said he wasn’t a sheep and that he was onto the scam. How the world managed to create a scam worldwide is something that only makes sense to the insane. The doubter’s wishes were ignored and he was still tested for the coronavirus.

Meanwhile, Maggie received a call from her fiancé. Winston had taken an apartment in Seattle and he was telling Maggie about it when he got pulled over by the cops. Maggie was so scared that she asked him to keep her on the phone. She also told him to turn on a camera if possible and so Maggie was listening in as the cops told Winston to turn off his phone. For some reason, they didn’t want him to record them.

Winston hung up with Maggie. This only made her more nervous and she kept trying to call him. She went into a full-blown panic as she was waiting for word from him. Maggie imagined all the possible scenarios of what could be happening to him and she was set on reaching him. She even handed her phone to one of the interns to call while she treated a patient. Maggie wanted the cops on the other of the line to know that people care for Winston and so Intern Ortiz was calling Winston as Maggie treated the man with a rubber bullet in him. The rubber bullet was an actual bullet covered in rubber and it can cause the same damage as a regular bullet. And so shooting someone with it carries the same issues.

Maggie’s patient started to flatline. She treated him and he would be fine one second and then flatlined the next. The doctor knew they had to get the bullet out of the patient. They rushed him to the OR and Maggie asked the intern to page Richard. Richard was himself in the OR with his friend and Jackson.

The two were talking of the protest when Jackson revealed he’s never actually gone out to protest. He usually writes checks because he thinks they’ll do a better job and so he thought Richard would judge him, but he didn’t. Richard said he wasn’t going to judge how someone dealt with the trauma of being born in this country. Richard has seen it all and so he was supportive of Jackson. And he was supportive of Maggie.

Maggie asked him to track down Winston. She was scared her fiancé was dead and thankfully Richard knew just what to say to get her to calm down. He got her to focus on her surgery. She went in and she handled things and she came back out to find Winston on the phone. It had taken Winston twenty minutes to call back because that’s how long the police stopped him. They tested him for a DUI and for drugs.

They also threw everything out of her trunk out so that they could test that as well with the drug-sniffing dog. Then, once they realized they didn’t have anything on him, they let him go. Winston was pulled over because his bike rack was obscuring his license plate and it got worse once the cops realized it was a black man driving the car.

Winston told Maggie he was going to need a minute before he’ll be okay. Only he was alive. It was something they couldn’t take for granted nowadays and so Maggie stayed on the phone with him while he worked out his nerves. The two were on the phone as Richard returned to his friend. His friend has been to so many protests in her life that she has wounds from most of them.

She even was there on the March on Washington and she got to hear Dr. Martin Luther King speak his infamous speech. She was eleven at the time. So, she mostly focused on cooling down in the reflective pool but she was there and she remembers his words even now. Richard’s friend told Hayes and Jackson all about that day. And that inspired them, even more, to keep fighting.

Hayes later told his boys that they were going back out to protest during the day. Jackson decided to protest after work in spite of the citywide curfew and Richard was going to continue the fight. The doubter in the meantime died. He refused treatment and he tried to leave the hospital.

He made it as far as the parking lot before he went in lung failure and he died before he could be treated. His death didn’t make sense to Bailey. She lost her mother because her mother was already ill when she came down with Covid-19 and so to see someone who could have lived, willing to die – it just didn’t make sense to her. Bailey and Teddy had laughed about the conspiracy. They weren’t getting made extra for pretending a pandemic exists and so the two had to laugh or else they’ll fall apart again.

Maggie was later so happy to see Winston again that she stayed up most of the night waiting for him.

Schmitt also used the time to finally shine on his own. He took in everything Meredith ever taught him and he was a hero today when he treated someone that was eviscerated by the pressure chamber.