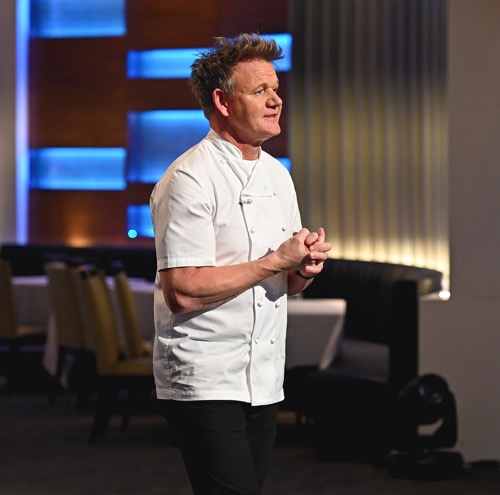 Tonight on FOX their Gordon Ramsay culinary competition series Hell’s Kitchen airs with an all-new Monday, July 19, 2021, season 20 episode 8 and we have your Hell’s Kitchen recap below. On tonight’s Hell’s Kitchen season 20 episode 8 episode called, “Young Guns: A Devilish Challenge,” as per the FOX synopsis, “The remaining chefs compete in a tag-team relay race competition, in which they must cook entrees against the other team. Later, five chef-testants face the first “Cook For Your Life” challenge of the season.”

In tonight’s Hell’s Kitchen episode, No elimination. There was no elimination because Kevin from the Blue Team was kicked out during dinner service and thankfully Chef Ramsay to kick out anyone else. The two teams have made it halfway through the competition. It was time to celebrate and so Ramsay put together a dance party. Everyone got to dance.

They got to relax and just for a moment they got to take their minds off of the competition. Things returned to normal later on but for a moment everything was good and so that gave the two teams something to take with them into the next challenge. The next challenge was a doozy. The two teams have to cook the meals for dinner service and they couldn’t cook as a team.

Only two members of the same team were allowed in the kitchen at the same time. It was a communication relay challenge. The next team after the first one has to pick up where the other left on and continue cooking. They only have thirty minutes in all. The relay teams have five minutes each and it quickly descended into chaos. The teams only have fifteen seconds to tell the chefs after them what started.

Some forgot to cook certain items. Some forget to mention what the timer is for. It was absolute chaos and it wasn’t until the very end that the teams got to work altogether. The last five minutes of the challenge is when everything got done. They finished plating and then came time for judgment.

The Red Team started with a disadvantage because the first two of their team didn’t get started on proteins. They left it to the second two and so the cook on their beef wellington was under. They did however make up for it with their other dishes and it was the Red Team that won the challenge in the end. The Red Team received their reward.

They got to go zip-lining and fly around like superheroes while the Blue Team got to go through dumpster bins. They were sorting out recyclables as the Red Team walked right by them to go to their reward. The Red Team loved their reward. They love relaxing and having fun. The two teams also got to hang out afterward and Josie got especially friendly with someone from the Blue Team.

It was so friendly that Sam asked if the two needed the room. Everyone laughed and they were still laughing when Chef Ramsay called the room. Ramsay wanted to speak with Josie. He asked her to come to his office and he talked to her. He told her to trust her own voice.

She’s great at cooking meat in spite of being a vegan and so she just needed to trust herself more. Ramsay next called Emily. He also gave her an inspirational chat and it became clear that he was speaking with everyone. He told them all what they needed to work on. He also gave them kind words about what they were doing right. Ramsay also evaluated everyone and he wanted them to know they were evaluated because of the next challenge.

The next challenge could send someone home. Ramsay said only five chefs are cooking in the next challenge and out of five it was a guarantee that someone would go home. Ramsay chose the five chefs out of a ranking system. The other contestants ranked their friends and the bottom five were the ones that had to cook. It was called “Cook For Your Life Challenge”.

It wasn’t surprising that two non-meat-eaters had to cook. They were at a disadvantage and that’s why they were on the bottom. The five chefs that had to cook were Keona, Josie, Victoria, Emily, and Sam. Things started out great for everyone. They came up with their meal plan. They got to cooking and the rest of the contestants got to watch the challenge from a screen.

Then things took a turn. One chef burned her pork chop, another chef’s pork chop was looking a little too pink, and one broke her vegetarianism to taste the pork chop. They all cooked their dishes and they judged by whoever’s dish came next. Sam went against Josie. Sam won

Keona was eliminated. She just shouldn’t have relied on burned meat. She should have at least tried to cook another and her one failing cost her everything tonight.