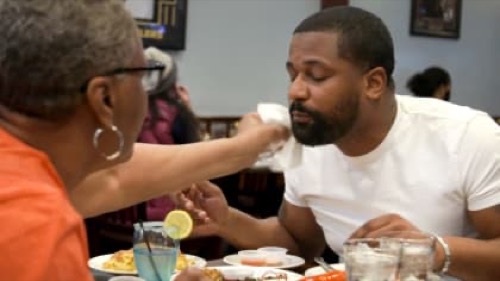 Tonight on TLC their new reality show I Love a Mama’s Boy airs with an all-new Sunday, September 12, 2021 episode and we have your I Love a Mama’s Boy recap below for you. On tonight’s I Love a Mama’s Boy season 1 episode 2 “Anything for My Son,” as per the TLC Synopsis “Theous and Tia’s nuptials are dependent on Theous setting boundaries with his mom; Kim tells Matt about her job offer.

Bryan tries to convince Tracy that a honeymoon can include Mom; Mike catches up with a friend; Steph gets advice from family.”

In tonight’s I Love A Mama’s Boy episode, new couple alert! Tia and her fiancé Theous have been together for over ten years and they haven’t gotten married yet because they still need to work on boundaries. The boundaries they need to work on involve Theous’s mother, Carolyn. Carolyn is a little too involved in the couple’s lives. She goes through and sorts Theous’s mail.

She does his laundry. She also cooks for him. She was around so much that she had basically moved in and Tia was sick and tired of it. She and Theous are adults. They both have children from previous relationships and it’s time now for them to live their lives as a married couple. Tia shouldn’t have to fight for dominance over her man with his mother. Carolyn isn’t just Theous’s mother. She also wants to be his best friend and she takes advantage of him. She used her bad knee to get him to do things for her. And Tia was sick of it.

But that’s the problem with mama’s boys. They tend to rely heavily on their mothers to the point it jeopardizes their other relationships and that’s what’s happening with Mike and Stephanie. Mike and Stephanie have been together for years. They live together and Stephanie even gave up a job offer because Mike hadn’t wanted to move away from his mother.

Stephanie did that because she thought there was a future between her and Mike but he’s dragging his feet on proposing. He said he wants to wait for another two to three years before proposing because he wants to make sure he’s making the right decision when the truth is he hasn’t proposed because of his mother. His mother Liz used the fact that she’s all alone to manipulate him into putting her first. And only Matt couldn’t see that.

Then there’s Kim and Matt. The two of them were engaged and they were still living with his parents while their new house was being built in the backyard. Kim also received a job offer in Austin, Texas. She was liking what she was hearing about it and she was seriously considering taking the offer.

There was just one problem with that, though. It was Kelly. Kelly is Matt’s mother and she has such a hold over her son that he often gives in to her. Take for example the house the couple was building, Kelly decided a large part of it and she vetoed Kim’s ideas in spite of Kim living at the new house. Kelly also wanted to take over wedding planning. She found her old wedding dress and she wanted Kim to either wear or be a part of it for her wedding ceremony. And she also wanted to turn it into a pocket square for Matt as well.

Kim was dreading telling Kelly about her job offer. She knew right off the bat that Kelly wouldn’t approve of the moves because she would want her son as close to her as possible and so Kim is dreading breaking the news. Another person with news to break was Bryan. Bryan recently married his long-term girlfriend Tracey and soon they were about to embark on their honeymoon.

She also didn’t like the idea of bringing the kids with them and so Bryan was just using that as an excuse to justify bringing his mother along. His mother would be able to watch the kids for them as they enjoyed their honeymoon. Bryan doesn’t want to take back the offer because his mother was so excited about the tri but if he kept going with the charade then it was going to be harder to disinvite his mother.

Speaking of mothers, Theous is so whipped by his mother that they hang all the time at their favorite restaurant. They’ve been going there for almost a decade and the staff knows them by name. Carolyn helps clear away Theous’s plate. She smooches food for him.

He in turn ignore all of his incoming calls and that includes Tia. He set a call from his fiancé straight to voicemail. Tia knew that Theous rejected the cal. She couldn’t believe he did that. She knew it was because he was with his mom and she also knew that he has never rejected a call from his mother. And so that rightfully angered her.

Stephanie meanwhile turned to her family for advice about Mike and they told her to hang on. She loves Mike. She wants to be with him and so the only problem was his mother. His mother hasn’t dated since his father died and that forced him into the role of man of the house.

Kim meanwhile came clean to Matt about the job offer. His reaction was underwhelming because he instantly thought Kim wouldn’t move and he called her selfish when she said she was thinking about it.