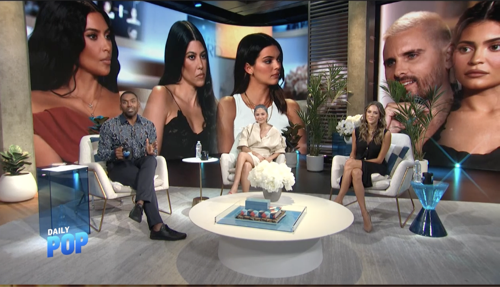 Tonight E!’s most-watched series Keeping Up With The Kardashians (KUWTK) returns with an all-new Thursday, June 10, 2021, season 20 episode 12 and we have your KUWTK recap below. On tonight’s KUWTK season 20 episode 12 called, “The End Part 2,” as per the E! synopsis, “The family buries a time capsule to commemorate their years on Keeping Up. Kim updates the family on her future, Khloe must decide whether to move to Boston to be with Tristan, and Kourtney finally gives Scott some clarity about their romantic future.”

In tonight’s episode of Keeping Up With The Kardashian episode, Kourtney is over it. She was over her family enabling Scott and she hated that he likes playing the victim. Scott and Kourtney are over. There’s no hope for them because Scott has never shown her consistency. She’s told him what he had to do in order for them to get back together and he’s never done them or even tried to. Kourtney was finally giving up on Scott.

They weren’t getting back together and, if he tried to play the victim again with her family, it was up to her family to check him. She told them that’s what she wanted to do. She told them what her boundaries are and Kim finally understands them in a way she never has before. Kim’s own relationship was in jeopardy. She had needed space from her husband and unfortunately, a marriage can’t work with them living apart.

Kim’s own collapsing made her realize how difficult it been for Kourtney. She better supports her sister now and everyone wants to end their long-running show on a high point. Kylie soon joined the family. She missed out on the earlier activities and so Kris planned something extra fun. They were going to do a special edition of charades. The charades were going to be of moments from the show.

They divided up into two teams and they played the game but Kylie and Kendall were younger during the start of the show and so they didn’t always remember things or how to act them out. Kim’s team won that round. She was on a team with Kris and Kourtney and they won after they lost the last round.

The kids also partook in filming. They were walking around with their cameras and asking questions. They were just being their silly selves. Kylie and Kendall also exchanged their secret Santa gifts. They had each other and they exchanged gifts and Kylie splurged. She hadn’t known the rules of the gift-giving this year. She bought her sister a vintage camera. Their early years were so well-documented that they wanted to keep that up.

Especially now that Kylie has a daughter of her own. The family still believes they’ll be super close even without the show and so they didn’t know about the subtle shifts that were already happening. Khloe and Tristan have discussed moving to Boston together.

Tristan wanted her to move out there with him. He wanted to pick up where they left things and to continue on with their relationship like nothing ever happened. Like the cheating with multiple people didn’t happen. Khloe was still processing her feelings and she wasn’t sure if she wanted to take that risk again. Khloe is at that point in her life where she doesn’t mind if she doesn’t get married again or if she doesn’t have another child.

Her life will be complete with or without those things. Khloe also has been getting closer to Tristan. They grew particularly close during quarantine. Tristan has to be in Boston for the basketball season. He wants his family to be out there with him and so he ultimately convinced Khloe to come out there with their daughter Tru.

It would be for six months out of the year. Khloe doesn’t have anything besides the past stopping her and so she chose to trust Tristan again. She was going to move to Boston. She got her family back. Kim meanwhile was losing hers. She expressed to her family all the troubles she and Kanye have been having.

She’s told them how she feels like crap because she couldn’t follow him on every decision. She couldn’t even move to Wyoming for him. Wyoming or Kanye’s place is known as the family ranch. They questioned if they would still have access to it if Kanye and Kim’s relationship further deteriorated. Some of the sisters still believed they would be welcomed there and Khloe was the doubtful one.

Khloe wasn’t sure what the future held. The sisters did their best to enjoy the rest of Lake Tahoe. They celebrated with fireworks and Rob was only mentioned once. Rob didn’t join the family for the final season because he’s going through whatever he’s going through and yet Scott made the trip. Scott and Kourtney talked. He told her how flattered it felt when her sisters tell him they still want him and Kourtney to work out.

Only he realized now how unfair it was to Kourtney. He was going to stop doing that and they’ve both closed the book on their former relationship. They were in a good place right now. They co-parent and their children were happy. Other than that, they’ve moved on and they were both happy beings with other people.

The family said goodbye to their show as well as to their production team. The team has been with them for fifteen years and so it was hard saying goodbye. They all cried as they said one last goodbye to the people who probably knew them best in the world. Khloe later moved to Boston with her daughter and Kim meanwhile checked to see if she passed the bar exam. She failed the first time she did the test.

She’s been studying like a demon ever since and unfortunately, she failed the test again. Kim was going through quarantine. She had her 40th birthday. She said goodbye to “Keeping Up with the Kardashians”. Her marriage was also ending. Kim has been through a lot and she didn’t even realize it until Khloe told her to go easy on herself.

Khloe and Tristan later played a joke on Kris. They showed the middle of his arm and pretended it was a butt to see how she would react and Kris had been pissed. She thought Tristan was doing something bad. He and Khloe had to call her back and admit it was a joke. Khloe flew back to LA after her property buy went through and so now she’s flying back and forth while her dream home is being built. And she was in LA when Kim came up with the bright idea to bury a time capsule.

They buried it in Kim’s backyard and they each contributed to it and so that was going to special when they opened for how many years later.