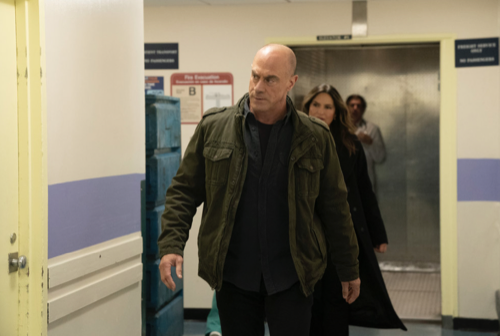 In tonight’s Law & Order Organized Crime, the trial of Richard Wheatley was ongoing. Detective Elliott Stabler and his family were dealing with it in various ways and unfortunately his son Eli decided to use the time to rebel. Eli was a teenager. He was the youngest and the baby of the family. He also decided to do something very stupid. He went to New Jersey with a woman he had just met. They did drugs together.

They also might have slept together and a few hours later he found her dead in her bed. Eli panicked. He rushed to get back home and no taxis would take him that far. His phone was dead. He went to a payphone and he called his dad. He told his dad that he was on a corner. He asked him to come get him and his dad drove the whole way to pick him up.

But Eli wasn’t there. He left the corner. He started walking and he got to the bridge where he considered jumping off of it. The New Jersey police found him before he could. The officer who spoke to him was new to the job and it was only his third day, but still he found a way to connect to Eli and that was enough. He talked Eli down. Eli came back on the ground and he went with him to the station. Eli’s father was called. Eli got to see him and to talk to him before he was taken to a hospital for a psych hold. Eli confessed everything to his father. He told him about meeting the girl and taking drugs and not remembering anything until he woke up hours later. Eli said the girl was dead.

Benson went to go check. She went with Stabler and she overheard what Eli said. She looked into the girl’s death and found out that the girl had been murdered. It looks like she was suffocated. Eli’s DNA and fingerprints were at the scene. He also tried to kill himself hours after her death. Which just makes him look even more guilty. Stabler and Benson didn’t try to hide what Eli did. He did flee a scene and so the detective working the case arrested the teenager for murder. Eli didn’t waste any time getting his team together to investigate. He asked Jet to do some background research into this Mia Zabatino. She was the victim and the victim was in fact an escort. Only Eli didn’t hire her because he thought they supposedly met at the promenade.

Mia was hired escort. She didn’t even bring Eli back to her apartment. It was a temporary rental and luckily the guy who owns the place was a pervert. He had hidden cameras all over the place. Jet contacted the company of the “security” system and she got a video of the murder. It wasn’t Eli. He didn’t kill Mia. It was in fact her neighbor who killed Mia and he did so by sneaking into the apartment after Eli passed out. Stabler handed over the video to the Jersey police. His son was cleared and so he went to the hospital to get him, but the doctor wanted to speak with him first. He said that Eli was suffering from severe anxiety and that he tried to kill himself because he wasn’t afraid of what he might have done. He was afraid of telling his dad.

Eli was afraid of causing his father pain because he felt his father had been through too much as it is. But Stabler realized his son needs help. He was going to get him help and in the meantime the Jersey detective working the case gave Stabler an update. The neighbor was hired to kill Mia. He was paid in cryptocurrency from someone at Riker’s and Stabler automatically thought of Wheatley. He went to the jail. He confronted Wheatley who denied trying to set up Eli. He also said the only one in charge of his cryptocurrency is his daughter Dana and so Stabler visited Angela. He asked her if she’s seen her daughter and she pretended not to have heard from her. And that was another lie from her.

Angela also pretended to still be injured. She’s just fine and she told her daughter to get out of town for a while. She said her father would arrange things for her. Angela cannot be trusted and she knew not to cross Wheatley. The city decided not give him a retrial. They were letting him go and unfortunately that meant he was now a free man. Stabler and his family were given notice on Christmas Day. It certainly brought down the mood and who knows what Wheatley will do next.