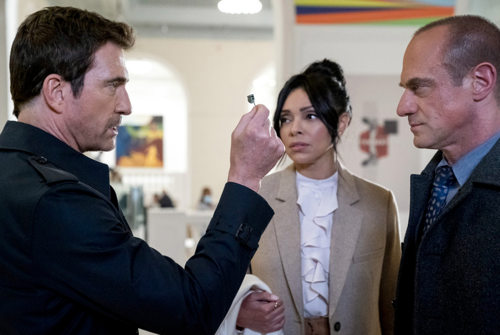 In tonight’s Law & Order Organized Crime episode,  the episode begins with Benson, who is being questioned about her CI, Felix Tinga being assassinated in front of her eyes. She says she made a call, and she believes it was the right call. Benson goes outside the room and asks Stabler if he told them that he orders him to stay in the car. He says he didn’t, he said if he had gotten out of that vehicle he would have been a dead man, she saved him.

A young man comes out of a guitar shop, there are boys running and two cops are running after them. The cops actually nap him, through him to the ground, and cuff him and one cop crushes his hand with his shoe.

Bell and Stabler are in the car when Bell gets a call from her wife, Denise. When they arrive, Denise says the boy is inside with her sister, and every bone in his hand is crushed.

Stabler goes to see Angela, she tells him this is starting to become a regular thing. She asks him if she can get him something stronger than tea this time, he says know. She walks up close to him, puts her hand on his cheek, and tells him it is ok. He leans closer to her and they start kissing. She stops him and asks what they are doing. He walks away and leaves.

Richard Wheatley drops by Gina’s apartment, he tells her it looks dingy. She asks how he knew where she lives, he says that he has had her followed. He also tells her that he knows about her record. She says she was at the bowling alley with her girl Kendra who was black, and they got into a fight with some other girls who insulted Kendra because she was black.

Richard is in the car with Gina, he tells her that he needs to make a stop. When he gets there, he tells her that he will be just a minute. Gina sees some guys with guns going into the place as Richard is going in. She gets out of the car, calls 911, and says someone is shooting up the place. She looks around a bit and then when Richard returns to the car, she is back inside and tells him to drive her to work already.

Bell and Stabler respond to the call, they find some dead guys, Bell thinks it was Wheatley who did it, he took them out for stepping on his Purple Magic. Stabler asks Bell how her nephew is doing, she says he is pretty shaken up, he might have nerve damage. Stabler hears something in the bathroom, they head inside, guns are drawn, and find a little girl in the bathtub.

Bell and Stabler are at the station, they tell Benson about the little girl, she hasn’t talked yet, her name is Gianna. Benson asks her if her memory is like her stuffed elephant that she is holding. She asks her if she saw the bad people who came to the apartment, she nods yes, but she didn’t see their faces, her uncle told her to wait in the bathroom while he went to get her a happy meal. She points to Stabler’s badge, the bad people were police.

There was no police activity at that address, Stabler says that doesn’t rule out corrupt cops. Ballistics shows that one of the guns from the apartment matches the one that killed Felix Tinga.

Gina meets with Bell, she tells her that at the apartment, the guys were dressed as cops and had guns, but she is pretty sure they were not cops. Bell tells her about the little girl waiting for her happy meal from her uncle, Gina says she saw him there when he heard the gunshots, he ran. She also says he had some weird tattoo like a spider web on his neck. It doesn’t take long for them to find the guy, they chase him down and end up getting him.

At the station, they have the uncle there, his name is Quan, and both Bell and Stabler are questioning him. He says if you step on Purple Magic, your gone. Benson comes in the room with photos of Piper, Vespina, and Felix and asks Quan how long he had been supplying drugs to them. He says Felix reached out to him two years ago. Then she shows him a photo of her brother and says he overdosed on drugs that he gave his sister. She tells him that she hopes the thought of him haunts him for the rest of his pathetic life.

Stabler follows Benson out the room, she says she spent two years thinking Simon did this to himself. She asks him if he has heard anything about Kathy’s case, he says no, he is staying away. She tells him that he seems better. He says he is confused as hell about so many things.

Wheatley is in his office with Bekher, Stabler and the team listen in, but what they don’t know is that Bekher knows there is a big in the office, he looks for it and finds it. Bell says Bekher is playing them. Stabler meets with Bekher who tells him that he found the bug because that is his job and he wanted Wheatley to trust him again.

Stabler drops by the see Angela again, this time where she is teaching. He tells her that he doesn’t know who that was last night and he shouldn’t have been there. She tells him that she can handle herself, not to worry. He offers her a lift home, but she says she is going to walk, she could use the air. She tells him that she is terrified of him, she wasn’t prepared for him. Richard shows up and asks her if she is prepared for him, and what is “he” doing there. Richard shows Stabler the bug that he found inn his office. Richard tells Stabler to go after him if he wants, but not to ever go near his family again.

Stabler tells Bell that the pipe bomb that killed Kathy was reconstructed and had these unique markings on it. The team finds that there are witnesses in the apartment building that say they heard police before the gunshots went off.

Stabler meets with Angela again, she tells him that he didn’t have to follow her home last night to see if she was ok. She asks him what is wrong, he says he is in a place that he doesn’t want to be. He says he is hunting the person that killed his wife and her son, she is the ex-wife of a prime suspect and he shouldn’t be there. He cannot let his emotions derail him from his mission. She tells him to slay the dragon.

Bell calls Stabler, she says they were right, Bekher bought the vice. She tells him that no matter what they need him to testify that Wheatley gave him the order to kill Kathy. Bell and Stabler show up to meet Bekher, with backup. Bell tells him his place is being searched now. They are looking for a vice that was used to make a bomb. Stabler goes after Bekher, he says Richard didn’t give the order, Angela did.