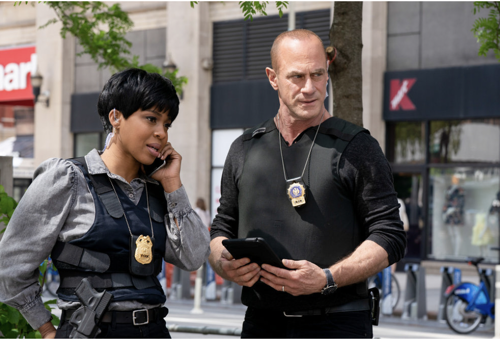 Angela tries to extract her children from Wheatley’s clutches; Stabler puts the finishing touches on a long-awaited plan.”

In tonight’s Law & Order Organized Crime episode, the episode begins with Richard Wheatley straightening his tie in the morning – then we see Stabler in the shower.

Bell is getting ready to leave the office. Angela is not eating; she tells her lawyer that she will eat when Richard is in custody.

Bekher is with Richard, and so is Ritchie. They are meeting Gianluca Silvano in 45 minutes. Just then, a group of men walks in, Richard says they are a precaution, they are about to enter a deal that will enter the Wheatley enterprise into an unprecedented level of global influence. And, he expects the level of scrutiny on them to raise accordingly. He brought on new security detail. One of the new security guys shoots Bekher and he falls into the pool dead. Ritchie looks shocked.

Silvano is eating breakfast, finishes up, and is ready for showtime with Wheatley. He has a hearing aid in his ear from the police, a driver picks him up and tells him that he can’t bring anyone with him. Then, the driver wants his cell phone, Silvano gives it up but tells the guy that he doesn’t take orders from Wheatly.

Bell tells Stabler that Gina has not checked in for the last eighteen hours. The team is getting ready for the meeting. ESU is in place, Bell tells them not to jump until it records the transfer of cryptocurrency from Silvano to Wheatley’s bank account. They need to look to Bell for the signal, then they go in and arrest him.

Silvano asks where Bekher is, he was supposed to pick him up. Bell hears this and turns to Stabler, first Gina and now Bekher is missing, something is up.

Richard tells his son that he had to kill Bekher because he witnessed him killing a cop and would hold that over his head for the rest of his life.

Richard and twelve men arrive at a building and go inside. Meanwhile, Denise is outside the courthouse and is being interviewed for the lawsuit she filed on behalf of Damon King for personal injury and assault and battery against the NYPD and a claim against the two police officers that violated Damon’s civil rights. ESU bails, they heard Denise’s press conference, there is no backup. Meanwhile, Silvano tells Wheatley that he doesn’t like that Bekher was not there to pick up as planned.

In another area, police dogs sniff out where Gina was buried.

Wheatly changes the location, Silvano is losing patience. The new meeting place is in the subway. Silvano’s earpiece is not designed to record, Jet says that he needs a directional mic and she is going down there.

Silvano and Wheatley meet, Jet goes down and gives a hotdog to an undercover homeless woman, it has the directional mic in it. The two make a deal and the money is transferred, Jet confirms it, the team goes in. Wheatly sneaks in a subway car during the commotion, Stabler does too.

Richard sees Stabler, he takes a hostage. He runs, but Stabler catches up to him, and he gives up his gun. Richard tells Stabler to shoot him. Stabler goes to cuff him and Richard hits him. It doesn’t take much for Stabler to grab him by the neck and hit him. Stabler has Richard handcuffed and brings him back. Richard spits on the ground and when Bell reads him his rights, he says blah, blah, blah.

Jet is at Wheatley’s house, his wife is on the phone with Jet and tells her what to look for, they have a search warrant. Angela gets the news that Richard is in custody.

Back at the station, Oreskes asks to speak to Bell. Inside the office, Bell looks upset, she sits down and puts her head in her hands.

Richard is being put in jail, his son and daughter are also in a cell.

Stabler and Bell go see Ritchie and tells him that they need to talk about Gina, Ritchie screams for his father. His sister is in the other cell, she tells him to say nothing, wait for his lawyer. Bell is about to attack Ritchie, Stabler stops her. Bell tells him that Gina wanted to protect him because he was a good kid and incapable of hurting anyone, he didn’t deserve her kindness. Ritchie sits down in the cell and cries.

Angela has one request, she wants to see her ex-husband and she was hoping that Stabler would join them. In an interview room, Angela tells Richard that he ruined their kids’ lives. And, she tells him that she told the police everything, she has nothing to lose anymore. Richard looks over at Stabler and asks him if Angela told him that she ordered the hit on his wife. Richard plays them off each other and then calls them both a hot mess.