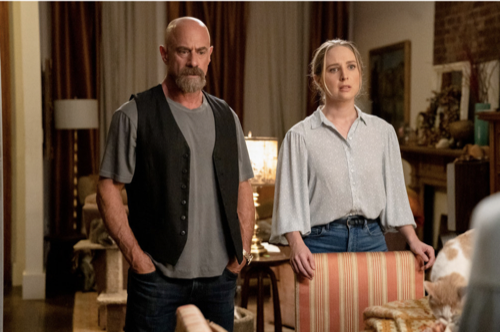 Tonight’s episode begins with Detective Stabler who is working undercover in a crime family. He had to be dosed with drugs to be accepted and unfortunately, those drugs had him tripping. He wandered around aimlessly. He somehow made it to his old friend’s apartment and he told her what happened. She told him the protocols. Captain Olivia Benson was police like Stabler and the two were former partners. She told him that he had to report what happened to him. He had to go to the hospital. He needs treatment at least and he turned the offer down. He also admitted he didn’t write the letter. The infamous letter that told Benson it would always be him and her. He had added that last part by himself. The rest had been written by his late wife.

Stabler confessed to Benson. He also tried to get up and couldn’t and so she helped him get to his Sergeant’s house. Stabler slept off the remainder of the drugs there. He woke up foggy and Sergeant Bell how he came to sleep on her couch. She also thought maybe she should pull him. It’s why Stabler hadn’t wanted to alert them in the first place, but he was able to talk her down. He proved that he was in deep with the Kostas and what happened later only proved that. Reggie’s uncle reached out to Stabler. He wanted his help in getting rid of a body. The body had to stay off everyone’s radar because this one had been personal and so Stabler told him the best place to drop off the body. He took him to a former insane asylum. And they buried the body out there.

Stabler later told Bell about it. They dug up the body and ran the deceased’s fingerprints. She then sneakily got the name of Stabler. Stabler now knows who Uncle Albi killed. He went to the deceased’s apartment to look for clues. He was doing that while Bell and Brewster were handling a separate issue. One of Brewster’s undercovers went dark. She showed up later on and she said she missed their meeting because she was attending her girlfriend’s funeral. Nova has been in deep for the past six years. Her girlfriend had mattered to her. She was one of the few people she could count on and so she went to church and she wanted to fly out of state for the funeral. Brewster denied her request. He told her she was needed in the Marcy Killers.

The head of the Marcy Killers had somehow gotten one of his best lieutenants out of prison. Hugo was being freed and it seems that Webb was angling his best people. He must be doing it for a reason. He could possibly be trying to get out from under the Albanians. Nova was needed now more than ever because they needed eyes in the Marcy Killers and so she couldn’t bury her love. Bell tried to sympathize with her. Her offer of friendship was shot down and Bell already had enough issues without adding Nova to the list. Nova’s IT pro Jet had gotten a lead. She checked Stabler’s new phone. The one that Kostas gave him and she was able to track the intricate work on the phone back to Kostas’ own tech guy.

His name is Malachi. He was a hacker and he worked for the Kostas. He helped create phones for them that allow the phone to only work one way. It had to be done by text and it had to be from someone within the organization. It also monitored everything. Jet checked the phone and she warned Stabler about its uses. He now uses phone booths for his conversation now and Jet meanwhile found Malachi. She and a detective were able to arrest him at a hacker event. They brought him back to the station to be investigated and Stabler also got somewhere with his investigation. He found out why Tristan was murdered. Tristan was killed because he was having an affair with Albi and Albi killed him because he didn’t want anyone knowing he was gay.

Being gay in his culture, it wasn’t accepted. Family members tended to drop them and Albi couldn’t afford to let that happen because he was a lieutenant in the Kosta Organization. John Kosta would either kick him or kill him for knowing too much. Albi almost killed Stabler for finding out about his secret and Stabler talked his way out it. He gave Albi his word that he wouldn’t talk. He won over Albi’s trust and Albi was rewarded. He brought Stabler into a meeting with the Kosta boss. Stabler was getting closer to the family and Nova was apparently doing the same with the Marcy Killers. She was all ready to quit when Bell went back to her and she told Nova the best way to get justice for her girlfriend is to see this investigation through. Both Nova and Stabler were working to bring down powerful bosses.

But that thing about the letter will probably haunt Stabler and Benson for a while.