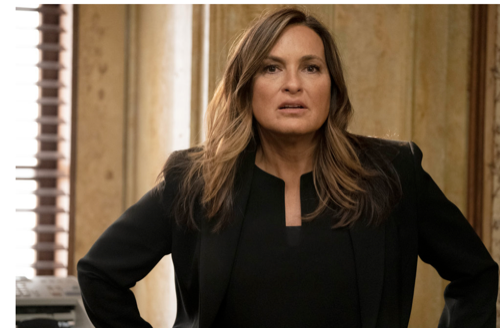 Tonight on NBC Law & Order SVU returns with an all-new Thursday, June 3, 2021 episode and we have your Law & Order SVU recap below. On tonight’s Law & Order SVU season 22 episode 16 “Wolves in Sheep’s Clothing,” as per the NBC synopsis, “While Fin and Phoebe make wedding plans, Benson and Rollins try to help a homeless single mother who’s being trafficked in exchange for safe housing.”

In tonight’s Law & Order finale episode, the episode begins with Fin and Phoebe are making wedding plans, Rollins is walking her dog. Then we see a mother, Rosa Estrada, and her child, Phillipe, arrive at a shelter, they unpack and then go outside to get better wifi for her son to do his homework. A security guard sees them outside and asks if they are on a waiting list for home, he puts Rosa in touch with a social worker. Fast forward, Rosa got an apartment for herself and her son. Later, the janitor tries to hit on Rosa, she turns him away. A neighbor, Mrs. Swanson, sees the exchange and tells Rosa that this is not that kind of building.

Fin is at the office, looks like Carisi is going to officiate over them for the wedding.

Mrs. Swanson drops by SVU, she tells Rollins that the woman’s mother is turning tricks and a little boy is involved. Benson comes out to see Mrs. Swanson, she tells them that there is sex for sale in her apartment. She goes on to say that all these men visit Rosa Estrada’s apartment, all men slithering in. Rosa told her to mind her own business, Mrs. Swanson doesn’t want the child to have to go back into a shelter. Benson asks her to let them do a little investigating before she makes another complaint.

Holt Tower, Monday, May 24 – Fin and Kat go to investigate Rosa, Kit’s guess is that Mrs. Swanson is just a busybody. They knock on Rosa’s apartment, she says she didn’t do anything wrong. Kat asks her if she has company, Rosa says UPS, maintenance people only. But, Phillipe tells Fin that when men come over and go in his mother’s bedroom, he just puts on his headphones. He can’t hear anything and makes no trouble because he doesn’t want to go back to the shelter.

Back at SVU, Fin tells Benson that he thinks Rosa is being trafficked.

Rosa drops off her son at school, Kat and Benson go to visit her and ask if she is in any trouble. Benson asks her what is going on at home. Benson promises her that she won’t have to go back to the shelter, but she has to tell the truth. Rosa tells them to leave her alone, they are doing well and she is close to finding a new job.

Back at SVU, the team tries to narrow down the men who visit Rosa’s apartment, one is Paulie Banducci, Head of Maintenance. There are five guys in total. Benson tells them to track down the prior resident in that apartment, Denise Campbell.

Kat and Fin meet with Denise, she says that Anton, who works for Paulie, set her up in her new apartment. Neither woman is willing to talk.

Dr. Katalina Merchado went from homeless to a doctorate in social justice, Garland tells Benson to speak to her.

Proud Life Daycare Center, Tuesday, May 25 – Benson and Rollins drop by to talk to Dr. Merchado. Benson tells her the women are unwilling to speak. Dr. Merchado wants to help in any way she can. Benson asks her who runs the lottery of how these women get housing, Dr. Merchado will look into it. Congressman’s Chief of Staff, Rubin Orteese, calls Katalina, she’s got to go. Rollins recognizes him from Rosa’s apartment surveillance.

Carisi and Benson hear Garland getting yelled out by chief McGrath who tells him that he thinks he is better than the rest of them. Benson tells Garland about Orteese, four times in one month going into Rosa’s apartment.

Rollins goes undercover at a laundry mat to speak to other moms, Benson thinks that moms talk to each other and she might gather some intel there. Rollins meets up with a woman who tells her, married women don’t get the apartments. In fact, there is a woman that has a two-bedroom all to herself, her daughter is still in foster care, he name is Lulu Davis.

Kat and Fin visit Davis, she says she is clean, and they still won’t give her, her daughter. Kat shows her pictures of all the men, she says she doesn’t know them, except for Paulie. Lulu says she got the apartment because she won the lottery. She says she knows Dr. Marchado, she got this apartment legit. She admits that Rubin is her boyfriend, he is going to help her get her daughter back. And, she can’t say anything, she signed an NDA, this is her apartment for life.

Fin says they could bring in Orteese, she admitted to having sex with him.

Orteese walks in to see Benson and Carisi, he brings his lawyer. Orteese gives up his boss, Congressman George Howard, but he wasn’t on the elevator security footage. And, Howard’s mother lives in the building, so he may be able to justify being in the building. All roads lead to Proud Life Daycare Center, Garland says there is no way that Dr. Merchado had anything to do with this.

Benson’s gut, Dr. Merchado orchestrated the whole thing. Carisi says this is just the tip of the iceberg, he is sure when they look at the financials, there are going to be kickbacks and more.

Dr. Merchado is with her lawyer, drops by Carisi’s office, Benson is there. She says she knows poverty and homelessness, she got these women a home, to be safe. Dr. Merchado is willing to give up people higher up to cut a deal for herself.

Benson goes to see Rosa, she tells it is over, she can keep the apartment, but she won’t have to do what she was doing to keep it. Rosa starts crying.

Time for Fin to get married, but he and Phoebe tell everyone that they have decided not to get married. They are not breaking up, they just want to be with their friends and family, they don’t need the government to make it official. Garland arrives, he tells Benson that he is going to take a few days off, to take some medical tests. He tells her that they are trying to dirty him up in the precinct to force him out, he won’t go quietly.

Rollins and Carisi are alone, she leans into him and kisses him.

Stabler arrives and says Fin and Phoebe make a good couple, he asks Benson how they met. She tells him that she is a cop and his first partner. Stabler gives Benson a look, she toasts to partners.