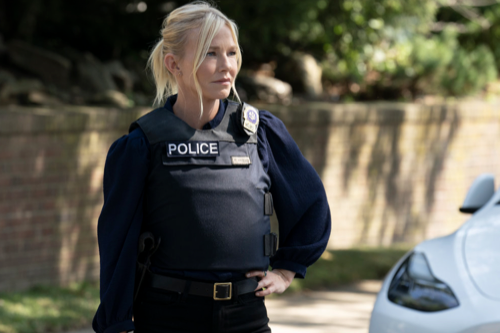 Tonight on NBC Law & Order SVU returns with an all-new Thursday, September 30, 2021 episode and we have your Law & Order SVU recap below. On tonight’s Law & Order SVU season 23 episode 3 “I Thought You Were on My Side,” as per the NBC synopsis, “Benson and Rollins must contend with the FBI and the Organized Crime bureau when a rape victim identifies a dangerous mobster as her assailant.”

Tonight’s episode begins in a bar, it is a private event, and when the singer, named Tara, arrives she sees a server walks out of the washroom with Gabe, the host of the party, and she doesn’t look happy. Tara asks Jules, the Maitre D if the girl is ok and he says she is fine don’t worry, but Tara is worried. Then Jules tells Tara no phones, no social media or anything, this is a private event.

Tara is singing when a cake arrives, it is Gabe’s birthday. When she passes by him, he grabs her and holds her on his lap, she looks very uncomfortable. Later, Tara is in her room getting changed when Gabe walks in, he tells her to go home. He attacks her, she runs and when she gets to the stairs she hits him to make her way, he slaps her back hard and she falls down the stairs. Jules and the guests look up and Gabe shouts and orders for someone to get Tara out of there, she is collapsed at the bottom of the stairs.

Fin and Benson meet at a café, he asks her if she has spoken to Stabler lately and she tells him that he is off the grid for a couple of months. He says he was invited to dinner and he didn’t show up, he says it’s not like him. Benson gets a call, they have to leave. Rollins is the first to arrive at Laguardia Hospital, Tara Riley is there and she says she was sexually assaulted before she was thrown down the stairs, she is in bad shape. She had.03 alcohol in her system and cannabis, her dress was ripped. Tara is speaking to Benson, she says she usually gets out of the club before Gabe gets too drunk. She goes on to say it was a private party for Gabe’s party. While she was singing, he pulled her onto her lap and put his fingers between her legs. She pushed him off and he didn’t like it. She went to her dressing room, he didn’t like that and followed her. He started to assault her, she kneed him in the groin. She ran, he caught her on the stairs and she pushed him to get away, he slapped her and pushed her down the stairs. She goes on to say that Gabe is connected and has a lot of cop friends.

Rollins looks at Gabe’s rap sheet, he gets off all the time, he also has friends in the DA’s office. Benson goes to speak to Jules and tells her that Tara may have a broken back. Jules says maybe she fell, she was drunk. Rollins speaks to the staff and they all take Gabe’s side. Jules tells Benson there were no cameras, they were turned off.

Carisi speaks to Finn who says it’s Gabe’s club, his people, his rules. Tara calls Gabe, she says she was in a bad mood and should have given him what he wanted. She tells him that she is hurt from the fall when he pushed her down the stairs. She has a lot of medical bills and doesn’t know what to tell her parents. He tells her to continue and maybe he will pay for her funeral. Benson and Finn were listening in and recording it.

Benson and Fin go to the bar and Benson tells Gabe that he is under arrest. Rollins puts handcuffs on him and they take him away.

Benson and Carisi are questioning Gabe with his lawyer. Gabe says he is completely innocent, but then asks what can he offer to make this go away. Benson asks him if he is bribing an NYPD captain.

Rollins and Finn have information for Carisi, they found Gabe’s DNA on two other rape kits. One is from a victim in Miami three years ago, she was found brain-damaged, with no memory of the attack. Another one is a Jane Doe that was found years ago under a bridge.

Office of the chief medical examiner, Jane Doe was so badly beaten it was hard to determine the cause of death.

The team is with Tara, Benson tells her that they know she is not Gabe’s only victim and the defense is going to plead consensual sex. Benson gets a call, she and Carisi head down to the Joint Task Force Headquarters. Stabler walks out of a hallway, he tells Benson she is not going to like this.

Gabe has been on their radar for a dozen years. He has four legit passports, multiple aliases, and ties to criminal organizations in multiple countries. He is involved in everything, drugs, sex trafficking, and more. Benson tells them that he just raped a twenty-five-year-old woman and might have put her in a wheelchair for the rest of her life. Gabe dismissed his council, he wants to talk to Stabler, Benson says she wants to be there.

Benson tells Gabe that they have his DNA on three bodies, he is looking at attempted rape, attempted murder, and murder. Gabe wants to give them information on his boss in exchange for his release.

Gabe tells Stabler he doesn’t want his boss to know he tipped them off about him. Gabe has set his boss him, NYPD, and the FBI move into his house. Gabe’s boss, Popcov, is gone, but one officer finds a crawlspace and things he may have gone inside. Rollins goes in and the crawlspace leads to a tunnel. Gabe and his boss try to get away on motorbikes but they are caught. Gabe pulls a gun and Stabler shoots him.

Later, the FBI holds a press conference and says one of the world’s most dangerous criminals, Popcov, has been apprehended.

Carisi calls Benson, Gabe was brought to his room after surgery, federal marshalls picked him up and took him – Stabler lied to Benson, they were played Gabe is in witness protection. Rollins is furious, she says being in witness protection is not going to stop Gabe from assaulting women.

At New Frontiers Rehab Center West, Tara finds out that the Feds took Gabe. Benson tells her that Gabe was more connected than she even knew. Tara tells her that she is supposed to protect her, not Gabe. Benson says it is not over and she is not giving up. Tara is furious and rightly so, she has to learn to walk all over again.