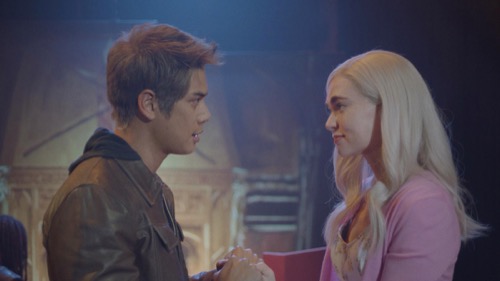 Tonight on the CW their new supernatural series Legacies air with an all-new Thursday, February 4, 2021 episode and we have your Legacies recap below.  On tonight’s Legacies season, 3 episode 3 called, “Salvatore: The Musical!,”as per the CW synopsis, “The students prepare to put on a musical about the founding of the Salvatore School at the behest of their mysterious new guidance counselor.

In tonight’s episode, Hope is brought in to speak with the guidance counselor after she gets aggressive playing dodgeball. She is also questioned about a meltdown she had. Landon is brought in. Hope doesn’t want to see him, he wants space from her. Hope gets up to leave. She has other things to do like tracking a monster. She eyes the guidance counselor. Maybe he is the monster. He tells Hope she knows him.

The guidance counselor catches Alaric walking down the hall, listening to a voicemail. He convinces Alaric they know one another and tells Alaric to take some time.

The school is hosting a Salvatore: The Musical. Landon finds Hope. He has questions about the Salvatores. She wants nothing to do with this.

Alyssa projects herself to speak with Milton. She warns him of a monster coming to the school. Meanwhile, Landon, Lizzie, and Josie talk about who will play Elena, Damon, and Stephen.

The guidance counselor confesses he is a monster named Puck to Milton. Puck works his magic telling Milton how he breaks people up and more. Milton walks away and then remembers there is a monster in the school. When he tries to tell anyone and everyone who the monster is he loses it.

At rehearsal, Josie is confused by all of Elena’s back and forth decisions while Josie struggles to play Caroline.

Landon talks to the guidance counselor about the play. He doesn’t know how to tell the story and he also doesn’t know what to do with Hope. After they talk, Landon goes to Hope who only gets angrier when he tells her he wants to turn a poem her dad wrote her into a song.

It is the night of the musical. Everyone wants Landon to change their lines. The guidance counselor stands by supporting Landon’s work. Josie takes the stage and sings as Elena. Kaleb appears as Damon while Jed plays Stephan.

Hope doesn’t attend. She paints in her room. The wind blows. A letter arrives at Lizzie from her mom. Meanwhile, Lizzie sings on stage. Backstage, the guidance counselor threatens Josie before injuring her hand. Landon has to scramble to finish off the play.

Hope arrives at the play to give Lizzie the letter when she walks in to see the scene of when Klaus speaks to a young hope. The guidance counselor is playing Klaus. His words are exactly what her dad said to her. It makes her curious about him but her emotions distract her. He gives her a sheet of music.

Hope takes the stage while Milton finally realizes the guidance counselor is the monster. He cuffs them together. They sit for the rest of the play, watching Hope sing. She sings to Landon.

Josie has her arm reset by her crush. The two kiss after her crush shares she plans to leave the school. Alaric finally gets the courage to go see the sheriff. Lizzie reads a letter from her mom about courage. Landon and Hope finally sit and talk about Raf and Klaus. Milton releases the guidance counselor. He rushes to Alyssa’s side and then realizes it was all a trick to get him for the Triad Spell.