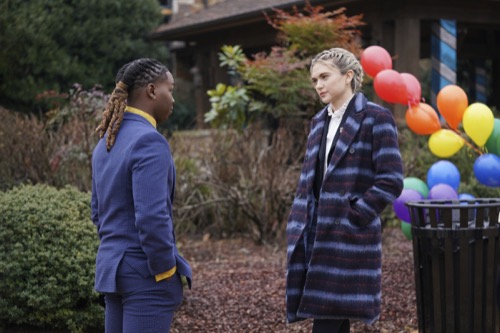 Tonight on the CW their new supernatural series Legacies air with an all-new Thursday, March 18, 2021 episode and we have your Legacies recap below. On tonight’s Legacies season, 3 episode 7 called, “Lizzie suggests holding a fundraiser for the school; Cleo helps Hope cope with her emotions; MG seeks help from Alyssa; when a leprechaun shows up at the school, it might be what they need to turn their luck around.”

In tonight’s episode of Legacies, Hope is painting with the new student, Cleo. She paints a picture of the school. They talk about Landon and her loss. Her friend has an idea to help her. Rick is getting ready to go to the bank. Kaleb wants to go in with him. Rick tells him no, about no compulsion. Rick wants him to supervise the fundraiser while he is gone instead.

MG is trying to talk to Alicia. Lizzie shows up. She gives him his assignment for fundraiser day. He isn’t happy. It looks like he will be cooking. Kaleb and Lizzie meet for the fundraiser but no-one is there. Lizzie is going to cast some spells. Kaleb tells her no magic. While they talk, someone makes balloons and rainbows appear. She swears it wasn’t her.

The new student Cloe is trying to get Hope to let go of her grief. Together they work on a clay bust. Outside, Kaleb catches leprechauns lurking around. Lizzie learns that leprechauns bring luck. She talks Kaleb into keeps the leprechaun around to save the school.

It isn’t long before cars pull up. The public has come to spend some money. Things get crazy. Inside, MG struggles to make cookies fast enough for the bake sale. Jo shows up. She offers help. They both keep mum about their plans later.

Hope loves the clay bust she has created. It’s Landon. A woman comes in and loves the bust. She wants it. She will pay. Cloe tells her 91k. Hope isn’t selling. She tells the woman to go back to the fundraiser. The woman tries to attack Hope who stops her. They head to see Lizzie.

Hope knows something is up. She explains about the leprechaun which gives Hope an idea – the portal is open. Now she is mad at Lizzie for not telling her. Kaleb gives Cloe the rundown of what is going on. Kaleb has to intervene as Lizzie and Hope are about to attack each other with weapons. Hope wants to shut down the fundraiser and deal with the portal.

Jo finds an herb that will speed up their baking time. She tastes it and then suddenly she cannot stop bleating out the truth.

Rick is at the bank when the loan officer starts flirting with him. Kaleb comes to the front door to see the townies going crazy, throwing money. He slams the door but Lizzie demands he open it. She made this mess, she will fix it.

Hope tries to get answers from the leprechauns but he isn’t talking. Cleo tells her she is torturing him. She lets the little green guy go. She just needs to know where the portal is. They head out togetherness to find the portal through the woods. Cleo finally realizes she is in search of Landon. Hope tells her she doesn’t have to come.

Rick explains his predicament to the loan officer, Vera, who reveals her daughter and Lizzie are enemies. Lizzie has done somethings. She denies him the loan unless she wants to offer her something. She shits the blinds.

Joe spills her guts to MG about how everyone she loves always leaves. He tries to tell her to push through the fear. He realizes he needs to take his own advice. Meanwhile, the bank guard comes running in to tell Vera it looks like a leprechaun stole their bank truck.

Cleo runs into Rick in the parking lot and tells him about the leprechaun, who jumps on Rick from nowhere. Cleo uses a spell to make him explode. Money rains down on them and slime. Hope is upset. She needed to find the portal.

Jo finally sees Finch. She confesses she is scared. That is why she stood her up. She wants another chance. Finch looks like she plans to say no but changes tell Jo they can work things out.

Kaleb visits Rick. He admits he went along with Lizzie’s plan. Things worked out however, Rick found a pot of gold. Cleo tries to make Hope understand she had to protect Rick. Cleo tells Hope she hasn’t asked about her, she is so consumed by Landon. Cleo admits she is the last of her sisters who were all murdered. Hope is sorry but she cannot stop looking for Landon.

MG comes clean and tells Lizzie that he has the ascendant. Hope is standing behind him. He turns around.